The Muttonmaster
sheepherding and utility bike 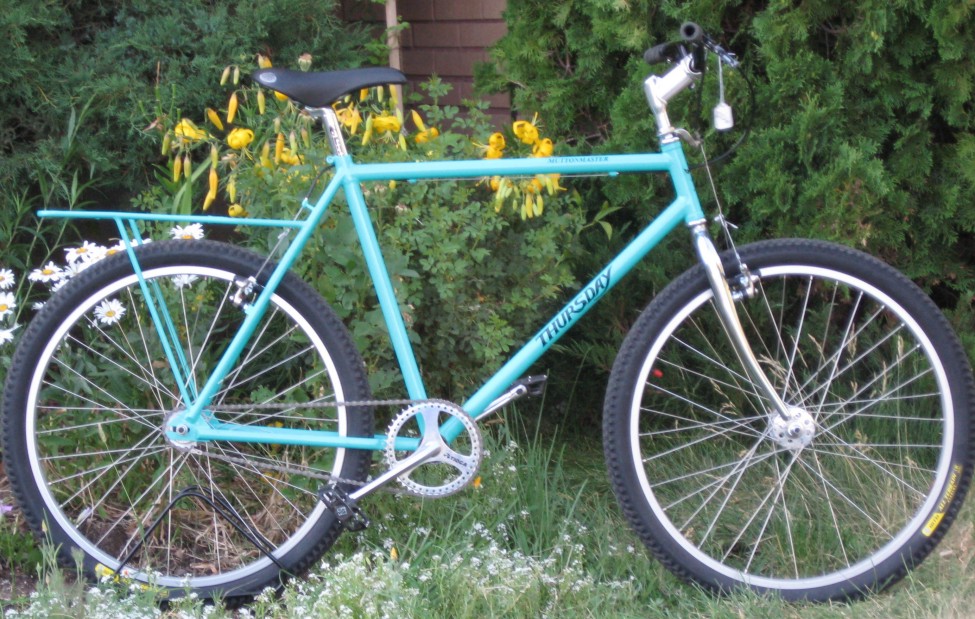 I set up my shop and incorporated on the Navajo Nation, safe from big daddy fed. The Muttonmaster was my payback to the Navajo people for their kindness, generosity and cool.

The muttonmaster started as a concept, rather than a design... a slow-moving, solid bicycle with a real good rack on it. Something you could use to get around on dirt roads and sheep trails, something that would haul a load, something that could replace a horse herding sheep.

It had to be able to carry a sick ewe or and injured dog, or a big lunch, a boombox, drinking water and some magazines... whatever.

The first muttonmasters were made from old bikes - three speeds, canti-frame cruisers, anything sturdy and cheap. They all were geared down with heavy duty tires and an integral, welded-on steel rack.

One of them had a second seat post welded to the top tube for a father who wanted to ride his 3-year-old son where he could see him.

As the concept developed, it started to make more sense to make the frames out of new material. The choice was aircraft grade straight gauge chrome-moly steel, oxy-acetylene welded. This makes a rugged, light and strong frame, one that can be built anywhere by a conscientious welder. Because these were bikes that most likely would never see the inside of a shop, it seemed like a good idea to make it easy to grease the bottom bracket: the bearing cups and BB shell are drilled and zerk fittings silver-soldered in.

For more on the muttonmaster story, see the article in the fixed-gear 'zine 63xc.com.

I still knock off a muttonmaster once in a while. Muttonmaster has a city cousin patterned after the great european three speed bikes I saw and rode there when my future wife and I ran away to Europe with each other. That bike is called "Je ne Regrette Rien" and is just what you need to bring back the baguettes and a half-kilo of fromage.