Road racing means carbon fiber, right? It's true, if you are racing professionally, especially if it involves a lot of climbing, CF rules. Crash it once and throw it away. Your sponsor will give you a new one. Don't have a sponsor? Oh …. 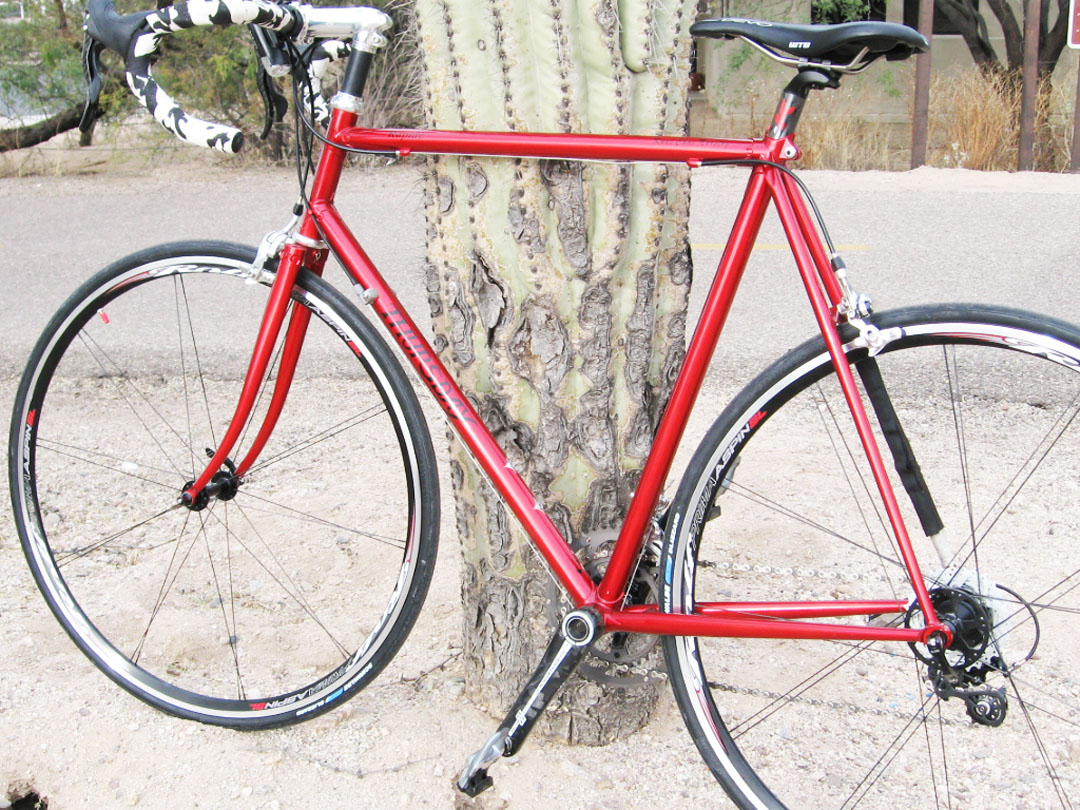 Thursday has been making Pista Mexicana, a sportsman's road frame for years, but had left full-race frames to the CF and Ti builders. Then my son got the road racing bug, about the time he graduated from college. As they say, Why Not …. I decided to knock off a frame for him. It came out so well, it's going to be a regular model …. named after the legendary Vincent motorcycles I used to dream of owning, and riding into my own blazing legend. (Sigh ...)

The Rapide and Black Shadow Series

What we have here is a lighter, faster-handling steel-frame bike. Thursday selects the lightest possible high-strength oversize tubing and builds it into a frame with short chainstays and a fairly steep head tube angle. Forks are your choice of steel or CF. The frame and fork are light, with a lot of lateral stiffness and a fair amount of vertical compliance. The build is with lightweight racing components, resulting in fast acceleration and fast, accurate handling..

The Rapide is a bike that rewards a rider's quick reflexes and mental powers – especially the powers of focused attention. The bike feels quick and it is quick. Quick off the line – it is light but puts all your power to the road. The frame is lively in sprints and gives you feedback through your legs. It feels like a part of you ..

Here's a typical build, a 57cm frame. Start with the heart of the bike: 11 inch (28.1 cm) bottom bracket height (69mm drop) with a 73-degree seat tube angle. Chainstay is 41cm, top tube is 57 cm, steering angle is 74 degrees. I raked the fork 46 mm to give that particular bike about 52mm trail. This is a number that splits the difference between stability and fast handling, given the wheelbase is under 100cm (99.7cm, actually). This is significantly less trail than what the majors are using on their top-of-the-line CF frames.

Of course, Rapide is a custom build. Geometry will be a matter of fitting your body, riding style, and your personal choice. If you really need a full-on custom build, go here and see what is involved.

Rapide can built as a fillet brazed frame or joined with silver-brazed lugs. The base frame uses lightweight, oversize heat-treated chrome-moly tubing, typically Columbus Zona or True Temper Verus, along with “tailor made” chain and seat stays. This frame is built for ride quality first, but is quite light builds up to well under 20 pounds. The bike above weighed in at 17.5. Air hardening or ultralight tubing is available as well, at (of course) extra cost.

Thursday suggests: Fillet brazed frame with CF fork of your choice for a smooth, flowing shape; or silver-brazed lugs with a matching steel fork. The lugged frame looks good, even with CF equipment and modern, low-spoke-count wheels. 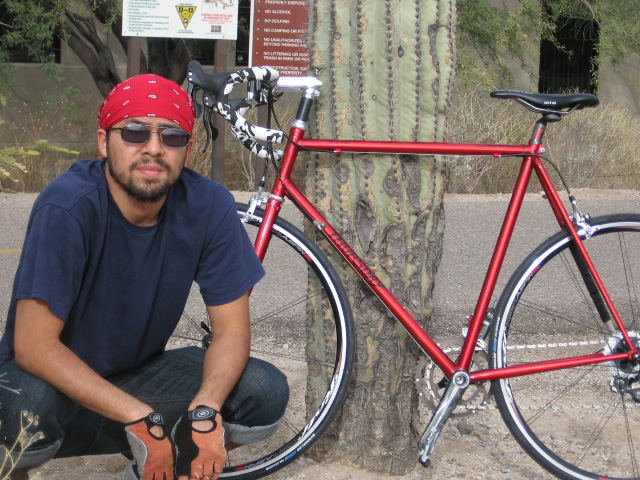 If you ride in Tucson you may get a glimpse of this bike speeding by you .....

Last year I got a sponsorship request from Mr. Ibrahim Wafula of Nairobi, Kenya. He is a well=known rider and raqcer in Africa for his speed, endurance, and only having one leg. His regular bike had been stolen and he needed something he could race on a 2,000-some race over bad roads from Nairobi to Mecca.

The challenge was to build a road racer that was designed for his riding style - he sets the saddle as far forward as it can go - and for the unbalanced forces from his powerful left leg. This is the man, and this is the bike! Ride on, Mr. Wafula! 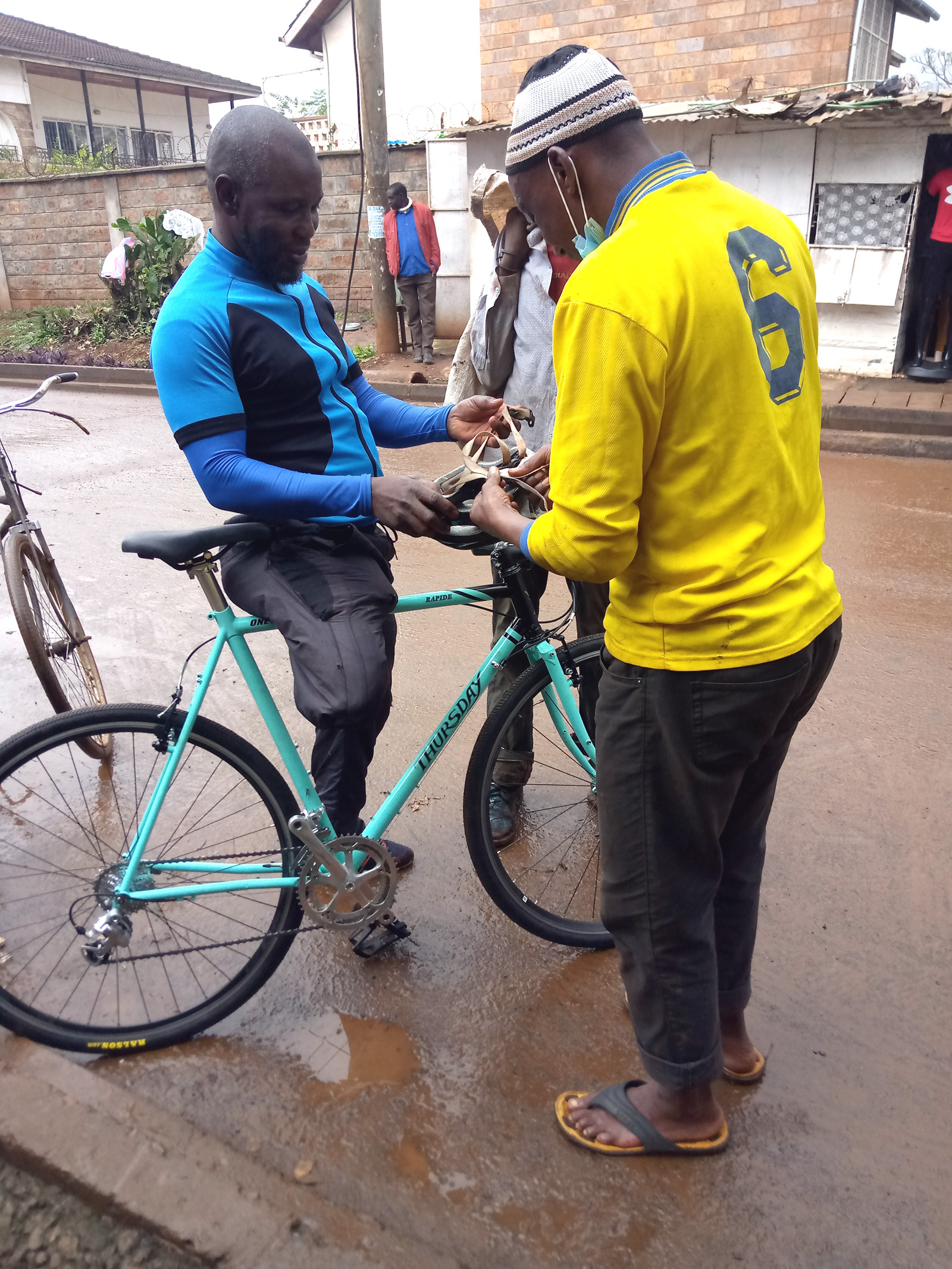 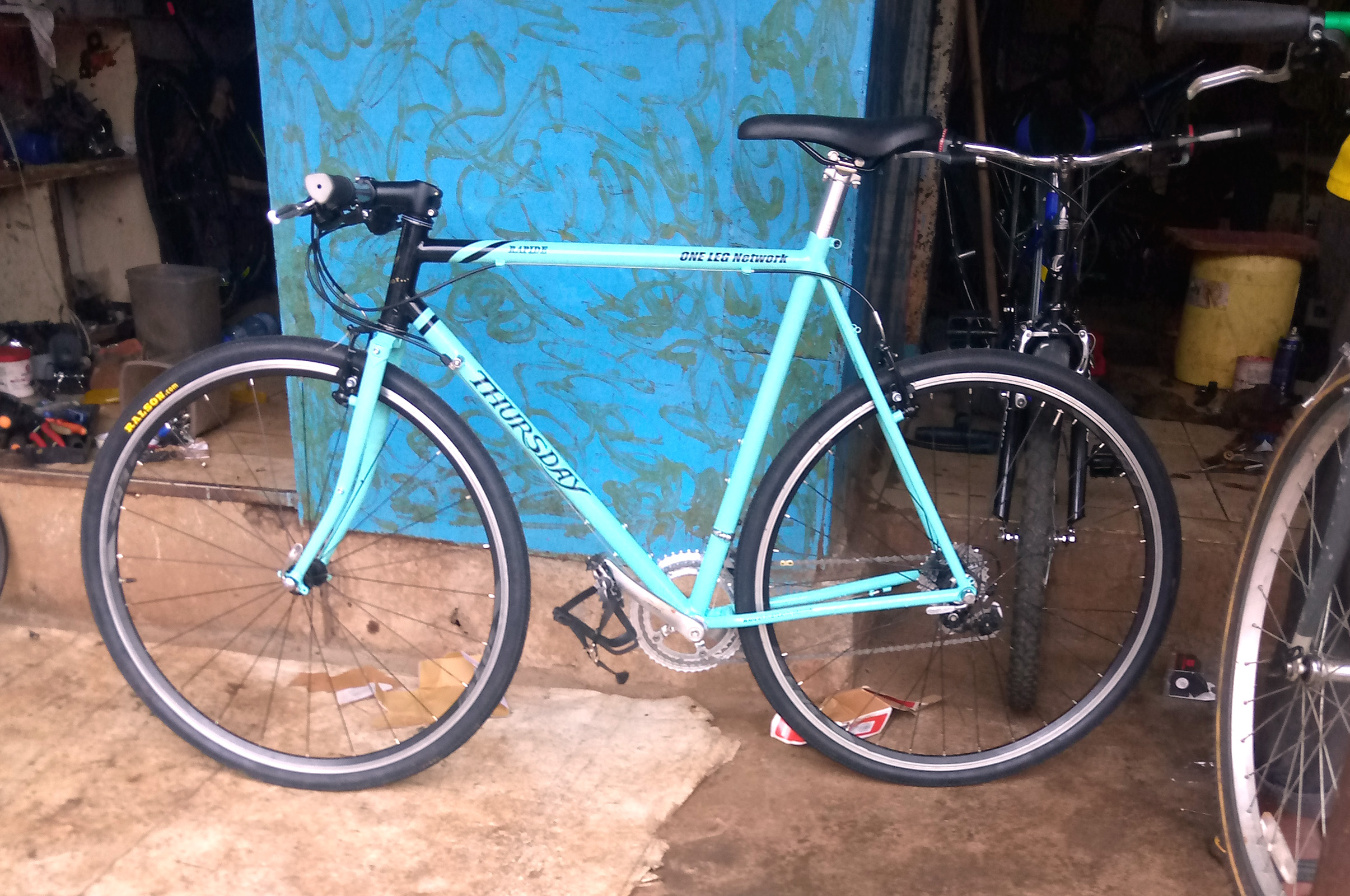 geometry can be modified to some degree at no extra cost

2011 base price: $1150 any color in stock, or anything I can mix from stock. This price includes a lot of personal service and custom sizing. It is higher than base for Thursday's other standard models partly because of that and partly because the standard tubeset is Columbus Zona or True Temper Verus for the main triangle, and "tailormade" chrome-moly stays.

Build: Thursday offers built up bikes with FSA and Campagnolo equipment, and Rolf or FSA wheels. I'll do an equipment schedule soon and link it here.