Je ne Regrette Rien
a city bike with an edge 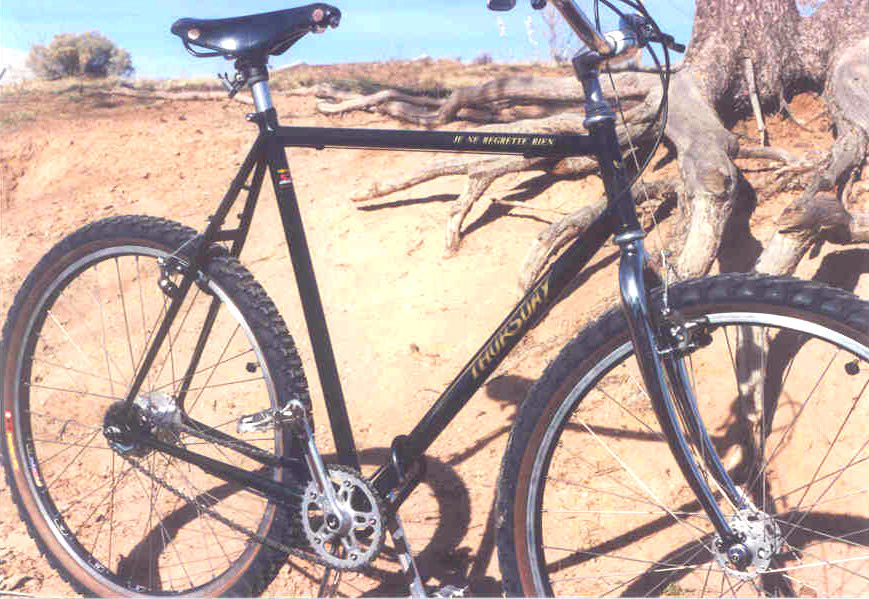 It really started when my dad took away my trike and gave me a shiny black "English racer." I had to stand on something to get on it. I've been riding ever since.

Much time passed, the woman I was mad about (and later married) lured me to Europe for a summer. She sent me a Eurail pass and instructions on where to meet her. I flew over early and hung out in Rotterdam and Amsterdam. The first thing I did was borrow a bike so I could get around.

If you like riding, you should visit the Netherlands. The bike paths they call fietspad are like little highways, separate from both motor and pedestrian traffic. The intersections are all signalized and people expect you to follow the rules. A lot of people ride, mostly on geared-hub bikes with racks, baskets, fenders and lights. You see big Dutch women steaming along 20+ kph with a full load of groceries or a kid. They'll run you right over if you get in the way.

I had been living a pretty urban life in Philadelphia, but that summer was something else. After I hooked up with Salisa we went to Paris and lived the rive gauche, cafe life - at least while our money held out. I wished we had bikes so we could just ride around from cafe to bookstore to market to club... It was fun mixing it up, people of all ages were living their lives in public spaces. A lot of them were getting around on bikes. And, oh yeah, the food was great.

The bikes I saw in europe were made for that lifestyle. The concept is that a bicycle replaces a car. They tended toward slack frame angles, with long rear ends. No clips, no special clothes, you just jump on them and ride. I was surprised at first to see really good alloy rims on them, until I rode a bunch of cobbles. Yeah, good, strong wheels.
I thought about that style of life as I got older. In my mind street life, life as a public performance, public space, cafes and bookstores, bikes, and a kind of defiant approach to fate; all mixed together.

Edith Piaf had a song, "Je ne Regrette Rien" that kept running through my mind.

Some people write songs. I designed a bike. It would be everything the european city bikes were and more. I wanted to build them with a lighter, better-made frame. So I spec-ed my favorite, Reynolds, for the main tubes. For stays I started out with straight gauge cro-moly, but have been thinking, damn the expense! I like the graceful look of tailor-made stays. I use geometry borrowed more or less from the Muttonmaster, but a lower bottom bracket height and shorter rear end. I decided to use 26-inch mountain bike wheels rather than the euro-size 26 inchers, mainly because of the wide variety of tires available. The frame is designed "under-square" with the top tube substantially shorter than the seat tube. This is for an upright, face into the wind riding position. Not only does it reflect an attitude that Piaf would have approved, it's also good if your back won't allow a bent-over or crouched riding position.

I tend to paint these in dark colors. The bike above was painted 1965 jaguar BRG (British racing green). Other likely colors include black, dark brown, maroon, dark blue, plus some old-fashioned muted oranges, greens, yellows and whites. The bikes are set up for street tires but will accommodate narrow mountain bike tires.

This bike is available as a mixte frame, and as you can see, can be had in a, aaah, brighter colour. This bike had it all - custom fork, Rohloff 14-speed hub, German SON hub dynamo and a fancy set of Busch & Muller "smart" lights, 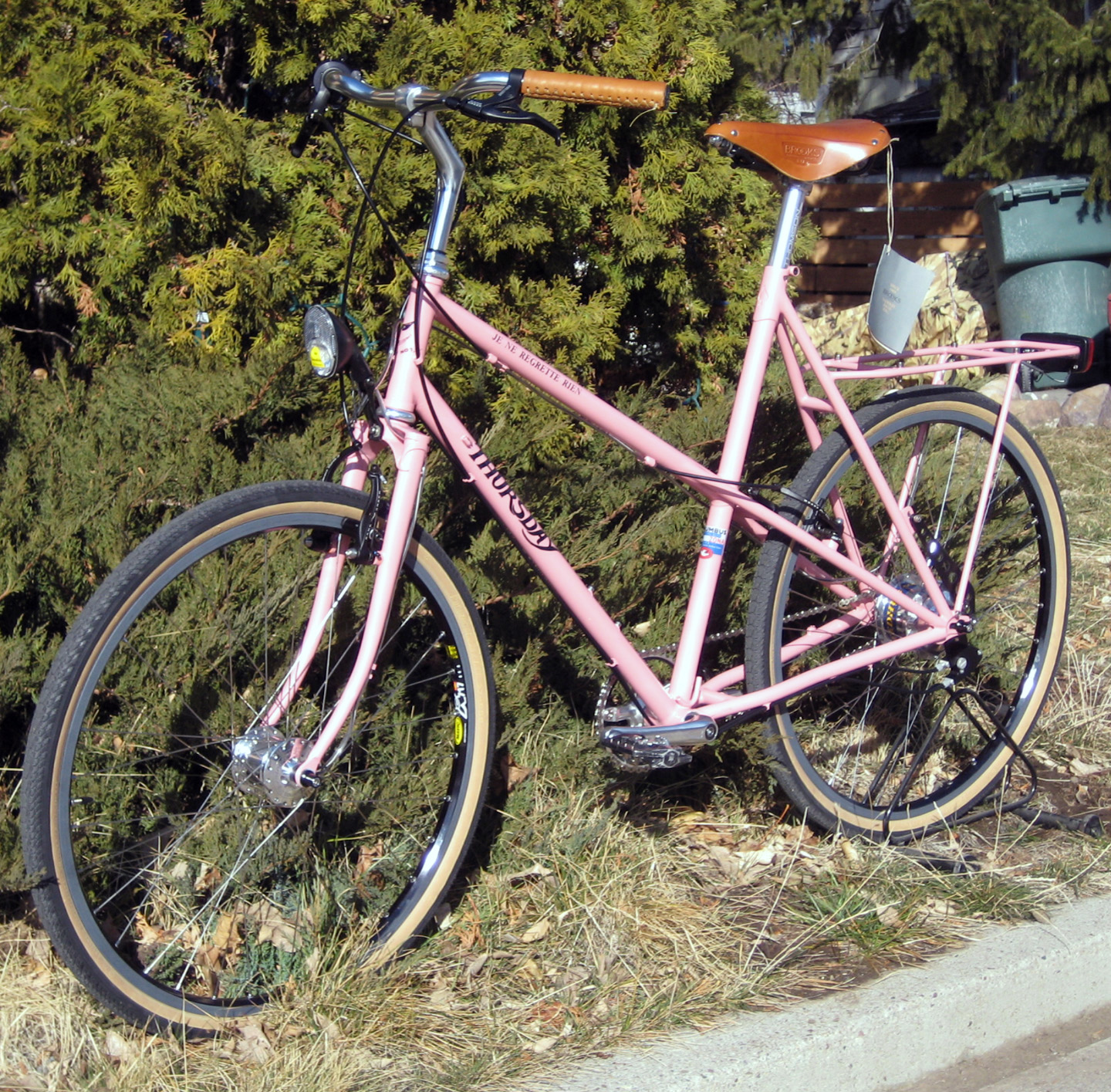 You can have this bike built with lugs, silver brazed, for an extra $75.

three, four, seven or eight-speed rear hubs; if you're feeling rich, you can get the 14-speed Rohloff at over twice the cost of the frame!

Thursday brazed fork. I use a really snazzy Kirk Pacenti fork crown and a 1” threaded steer tube for this beautiful fork, for an additional $250.