BMX has spawned its bastard children ... freestyle, street, vert, and dirt jumping. An' now the childun biggah than they daddy!

It all started at my first National, Rad Canyon in Salt Lake City, maybe 1997? They had a dirt jumping course set up alongside the track. Between motos, my son and I were watching the locals do "free style" on dirt. A kid came from nowhere and did a front flip over the first gap, then a back flip over the second. At the time this was more-or-less bleeding edge: in other words, Thursday territory. In other words, time to talk to some riders, right?

The bikes most kids were riding on trails were mainly freestyle-oriented: 35 to 40-pounders designed for ramp work. Well, on a half-pipe, you can make that weight work for you. A forty-pound bike is OK, long as you have a car to drive to the trails or whatever, and so long as your lifestyle supports multiple bikes. But what if you are a kid, and you want a bike you can ride to the trails? Or ride to school?

Or maybe you would like to do a little BMX racing as well as dirt work, maybe a little street on the side? But if street is your thing, check out Acid Rain's streetwise little brother, here.

So, what if I made a relatively light dirt jumping bike, like around 30 pounds? 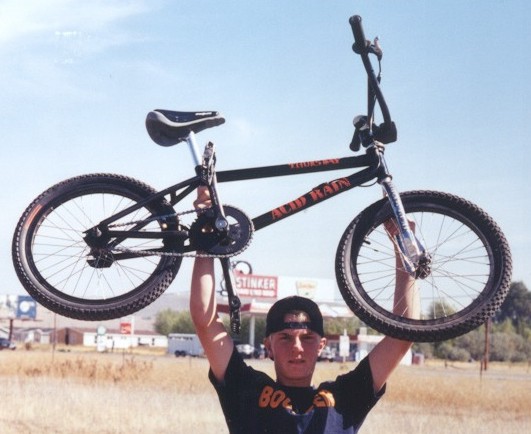 ACID RAIN is the result. Based on a shortened Vida Loca geometry, it uses Reynolds' fattest tubes for lightweight strength, plus heavier seat and chain stays and extra-thick chrome-moly dropouts. The prototype was given o a free-style team in Albuquerque. They loved the bike .. to death!

It took a red-hot, 180-pound team rider casing on a 30-foot jump to crumple the front end. But these are guys who use up a H*****n every six months. Not bad for what, in that context, would be an ultralight.

This is a bike Thursday wants to kick out at a low price, cause it's made for kids and other people who aren't made of money. Accordingly, wait until I hook up with Taiwan! Until then, Acid rain is gonna be a little pricey, but worth it, if it's what you're lookin for. Remember, this is a bike you can break ... that goes with the territory when you are building in this weight range. But 98 percent of you will never ride hard enough to break it, and in the meantime you won't need a truck to carry it around.


So here it is 20 years down .. the majors have caught on and are building dirt and street bikes in this weight range. Also the "deep dish" rear dropouts are long gone! I still have the prototype kicking around, though. Might start riding it up and down the block or something ....

Available options include
1 1/2" butted top tube and 1 3/4" x .035" straight gauge downtube
E-brake mounts underneath the seatstays
This bike can be built as a 24!