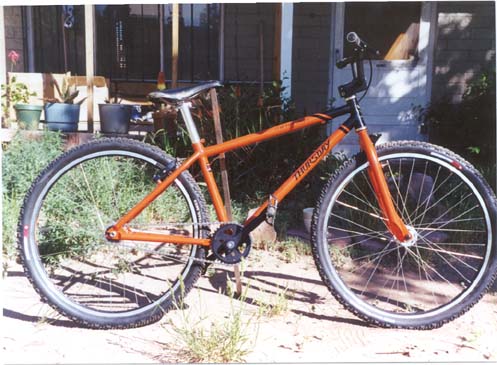 I had been racing Mi Vida Loca cruiser for three years, mostly at Duke City BMX in Albuquerque.. and getting my butt kicked every weekend by Charles Fernandez. But I was doing OK in the Nationals, which is where the story begins with this bike.

Black Mountain BMX is a freeway. Smooth, fast, good dirt, you can pass anywhere on it. I was in the main, back in the pack, when I saw an opening. I got on the pedals and dove inside on a curve to scoop another rider. My tires were popping and the rear end was starting to slide out, but I got inside the guy and took away his trophy. The tires were at their limit and a crash would have taken both of us down and out of the running.

Well, at the time the main choices for tires were Tioga Comp 3s and Richey Blue Slicks (what I was running). What if I could get better tires? I took a mountain bike with a fresh set of WTB Racing Raptors on it to the track. It handled like a whale, but the tires gripped like there was no tomorrow. I knew if I could get those tires on a BMX bike I could win races, going low on fast corners... but WTB was NOT going to make them in a 24 inch size. So maybe I could run 26 inch wheels?

There have been 26-inch cruisers before, notably SE Racing's OM Flyer, and they are perfectly legal under ABA rules. These old-school bikes were mostly too long to get around a modern, "technical" track. The plan here was to design a 26-inch cruiser with geometry as close to my 24-incher as possible. If you compare dimensions, you'll see that the only diff is 1/2 inch longer rear end; same head angle, same ground clearance.

Looking back from 2020, after all these years I can see that this was the first of the new breed of 26-inch cruisers. They are everywhere and most of them duplicate the geometry of this bike. I'm glad it happened. I made maybe fifty of them over the years. If you own one of the fabulous fifty you own a rae and valuable piece of bicycle history

It took a while to get around to building the bike. In the meantime, I made a bunch of dual slalom bikes and got used to building 26-inch frames with tight rear triangles. The big issue is chainstay design. The shorter the rear end, the sharper the bends have to be, and the more cutaway for chainring clearance. The solution was to heat-bend the stays and, instead of dinging them or cutting and welding, to weld in a heavy chrome-moly plate at the cutaway. This made a chainstay stiff enough enough for the kind of loads a strong BMXer puts on a bike. What I ended up with was a bike that built up around 25 pounds in BMX trim, with Profile cranks, a Landing Gear fork, and steel low-rise bars.

The surprise was the handling. It was just as quick as the 24-incher, PLUS it had superior action pumping through a rhythm section. I have had really good luck with this bike on fast, downhill BMX tracks, where the stability of those big wheels keeps things from getting out of control. The other thing I have enjoyed is just riding the bike around .. you can do anything on it. It makes training and wind sprints a pleasure, too. Well, almost.

The result is a bike that is stiff but lively. You can feel it wind up a little when you put all your juice into the pedals, then it leaps. This makes for magic on a gate start or setting up for a jump... This is a bike you can ride all day without burning out your knees. Not all of you are BMX riders.. but if you are looking for something quick and lively, this might be for you. Bleeding edge.. That's the story. This is my most popular bike at this time. People are BMX-ing them, riding them on the street, using them for urban assault, even for non-UCI cyclo-cross type events. One power couple in Portland bought one they both ride, I bet they come back for another just to prevent a divorce and custody fight.

So here it is 2020. The Dirt Rag bike has been ridden hard for 20 years and it is my go-to bike when I want to just take a ride. I took state championships on it in 2009 and 2010. It is my most popular model. I've made heavy duty VLs for jumping and park. I've made it with a real short seat tube. I've made a few with U-brakes. The Dirt Rag bike now sports a gates drive and tall gearing. And of course the disk brake version.,,, they're EVERYWHERE.

Where does it go from here? The Dirt Rag review got me thinkin', maybe I should build a version of this bike to take a suspension fork. One thing led to another, and what I learned on the VL got worked into the "New Model" and Total Eclipse of the Sun mountain bikes as well as the Copa del Mundo built for World Cup-class four-cross racing.

This bike has 110 mm BMX-sized rear spacing. This can be an issue with disk brakes - the only BMX disk hubs available at this time are from Profile and Kore. The Profile wheelset is not cheap. I build them up with DT spokes and a welded rim. That wheelset will cost you $440. It looks like I can put out a set with Kore hubs front and rear, stainless spokes and Rhyno lites for about $200.

A good thing to buy with the frame is a seatpost. Thursday has the Thomson elite in black 29.8mm x 440mm for a $60 upcharge. These 'posts are hard to get in that size, Thomson only makes them special-order. Good luck finding **any** 29.8mm seatpost on your own

Thursday has an OE agreement with Cane Creek which allows him to put the S-3 cartridge bearing headset on a bike for $30 extra. Silver or black. I can also get the 110 headset in colors it is really sweet but will run you more like $70 installed. And there is Chris King - I can ride over to their place of biz and pick up one of those for some serious money

Another good buy is a set of Super-X bars. 2.5" rise, heat-treated chrome-moly, black, with a cross bar. $45 These bars are no longer being manufactured. I've got a few left and when they're gone, who knows? Actually, the new aluminum riser bars are strong enough for BMX, long as you mount them to a decent stem. I am running a set now, lost at least a pound by going with them. They creak when I get on it ...

Available options include 1 3/8"/1 1/2" top and downtubes
butted seat tube instead of straight gauge for a lighter bike
disk brake tab, $35

Euro bottom bracket $20 ... note, no complaints from VL riders, but generally speaking the Euro BB has not been standing up well in BMX competition. But it's nice if you want to run mountain bike cranks or the new Shimano DX BMX units. I can also do a "mid" or Spanish bottom bracket shell for another $45

The internal hose appears from nowhere!

Ask about our no-extra-cost women-specific sizing option. Custom sizing at a standard price, for women and girls only!

Here are some links: