ECLIPSE OF THE SUN
A Mountain Bike with a Twist 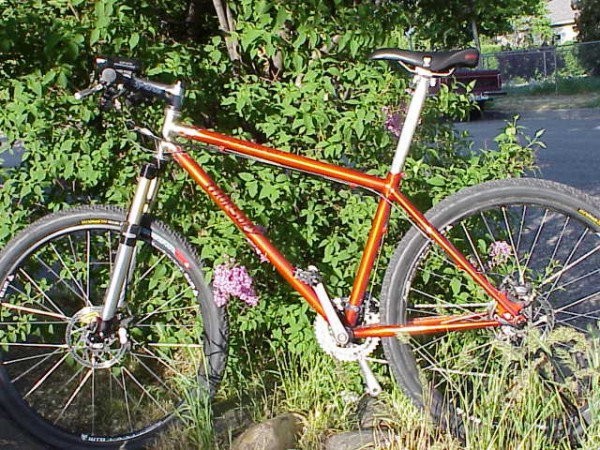 Window Rock and the Four Corners area are long on dirt, short on pavement. In country where a trip to the grocery store can kill a set of road wheels, a road bike IS a mountain bike. There was no way around it. When I started building bikes, I started off building what I needed the most. This was a time when mountain bikes were like oversized road bikes, with long rear stays and slack angles. They were OK as long as you didn't try anything fancy on them, and as long as you didn't have to get off the bike fast.

It all came together for me when I saw a Bontrager frame in a shop in Flagstaff. You could tell by just looking at it, that Keith had got it right. I couldn't afford one, so I decided to build one. In fact I built several, and sold off the others. Far as I know they are all still being ridden.

For a while I was making a basic chrome moly steel hardtail I called the 450. That was to remind me what the price was. It was during that period when you couldn't GIVE away a steel frame. I sold a few, even made one for my kid, then decided to let the whole mountain bike thing go. Since then I've been reading in the 'zines that steel is OK. Again. Who is it that decides these things, anyway? 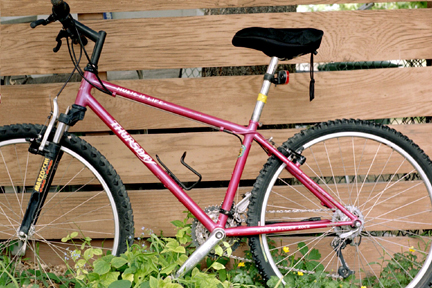 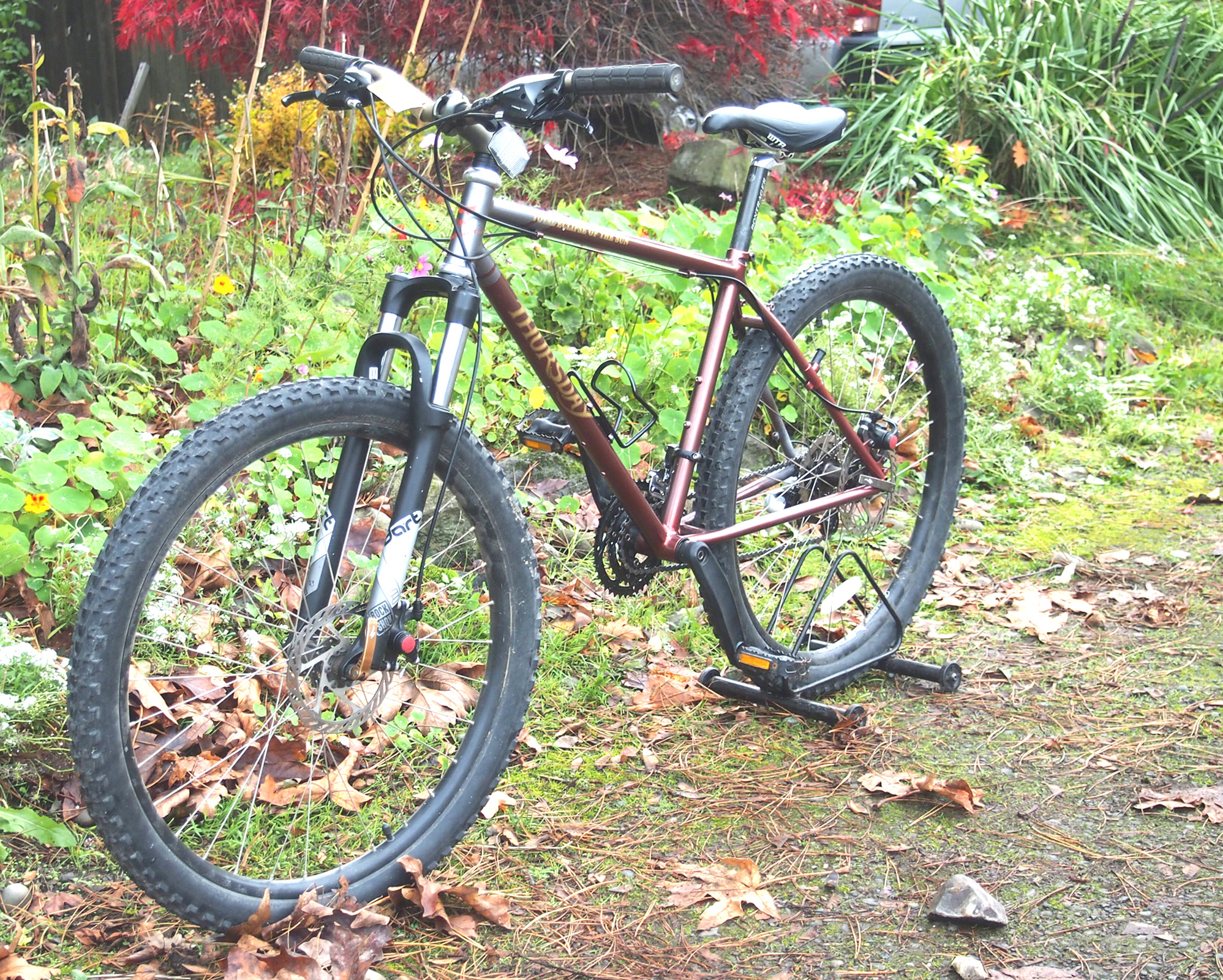 There still is a need for a good steel hardtail mountain bike. A few boutique manufacturers are making them, all with standard angles. This is Thursday's version of that bike. It doesn't have a standard angle in it. It is basically a cross-country bike taken to the edge. But why??? 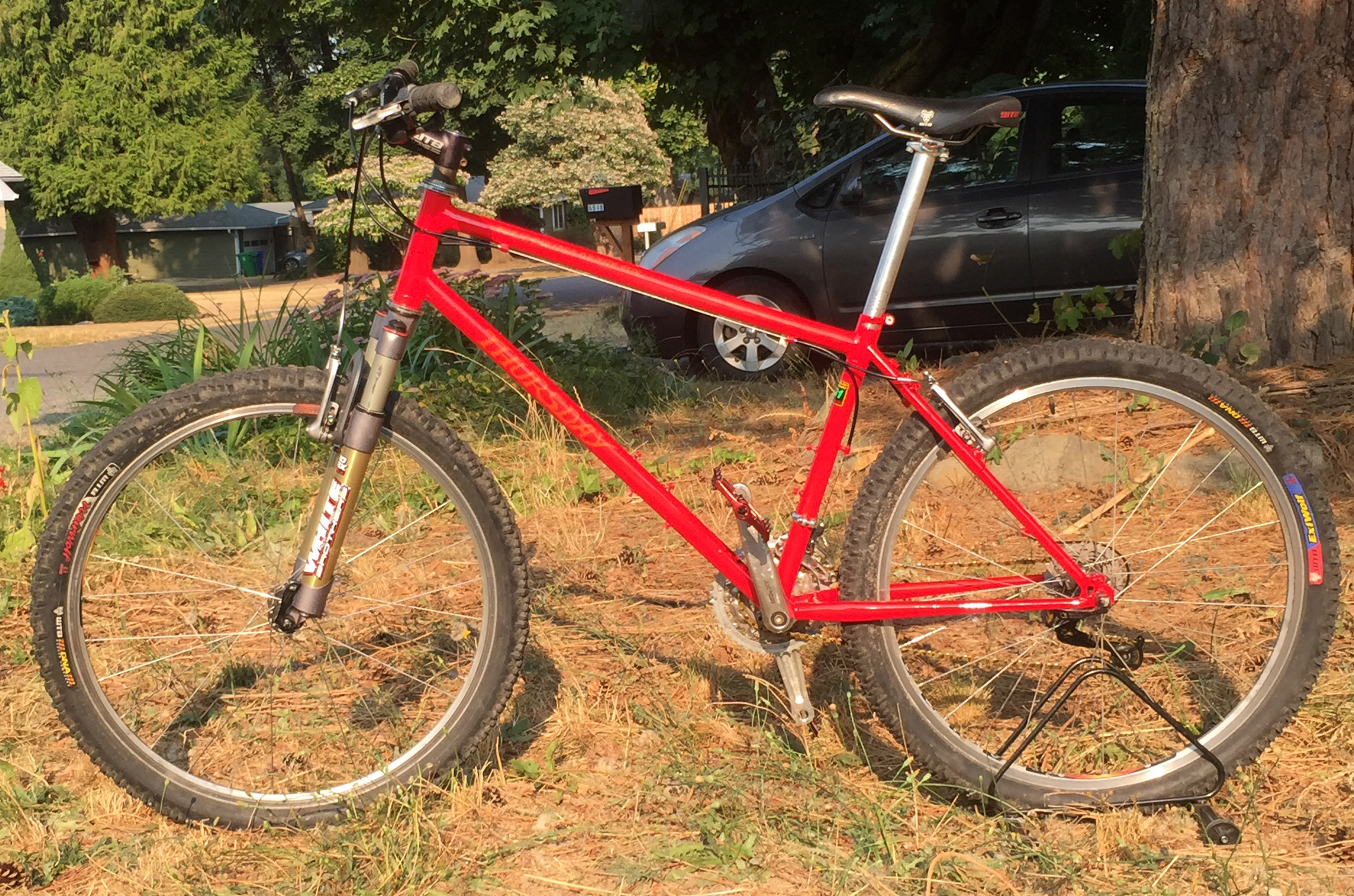 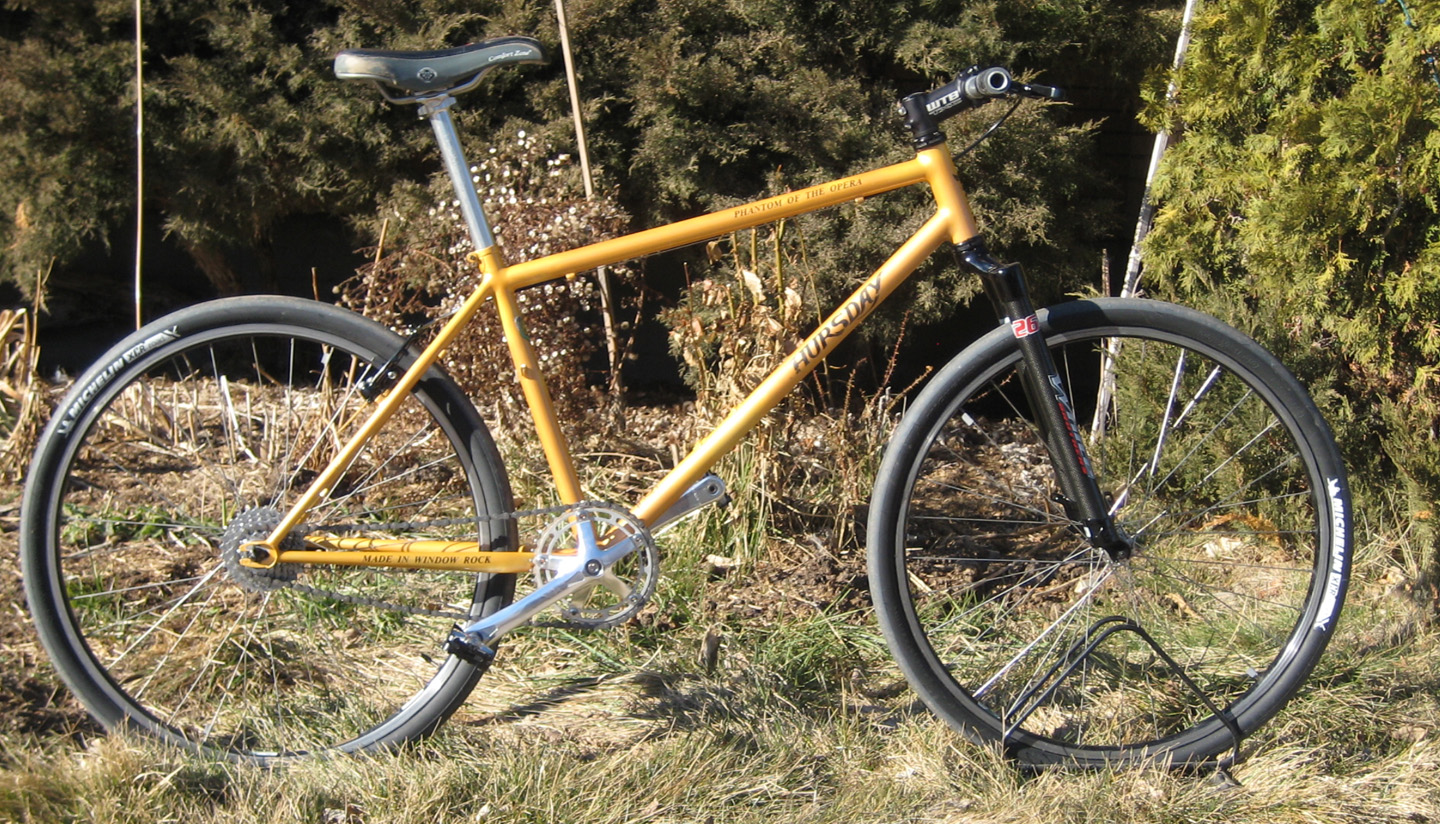 Here's a test for you: go to a bike rack and look at all the mountain bikes in it. Then look at the ones that are covered in mud. Then see where the seat is positioned on those bikes. If you are in mountain bike country, chances are most of them will have the seat shoved as far back as it can go. Observe and learn! The headtube angle is a marketing shot in the dark. I like sharp handling myself and figured there must be other riders out there like me.

This is a bike you can sit on and ride all day, but it has a little bit of an edge to it. The handling is on the sharp side. The frame is just big enough for the long haul but not so big you can't get out of the saddle and dominate a technical situation.

The Eclipse, like all Thursday products, is open to interpretation. You can order it as a standard model or as a custom. If you catch Thursday on a good day, he'll give you custom work at a standard price. Generally, you can order it by size and/or proportion: ask for "dachshund" or "gazelle" frame proportions. You could ask for the "Cactus Cup" geometry, for instance: 72 - 72 angles and 16.5" chainstays ....

The base frame is fillet brazed with Columbus Zona tubing, or special order Reynolds 853 or other high-zoot tubing. Cable routing is standard Thursday, triple stops under the top tube, with a top-pull front derailleur.

Disk tab and brace over a Breezer dropout

Carved steel flames prior to final polish and chrome.

Standard fork: Thursday has had pretty good luck with White Brothers (now MRP)and Marzocchi. In 2006 the frame was redesigned around the 100mm travel White Brothers Magic 100, but can be spec-ed for a longer travel fork.