Thursday moved the shop to Portland and got a look what everyone was riding. A lot of people like these single speeds. Wotthehell, might as well build one … Come see it at the Oregon Handmade Bicycle Show this fall! 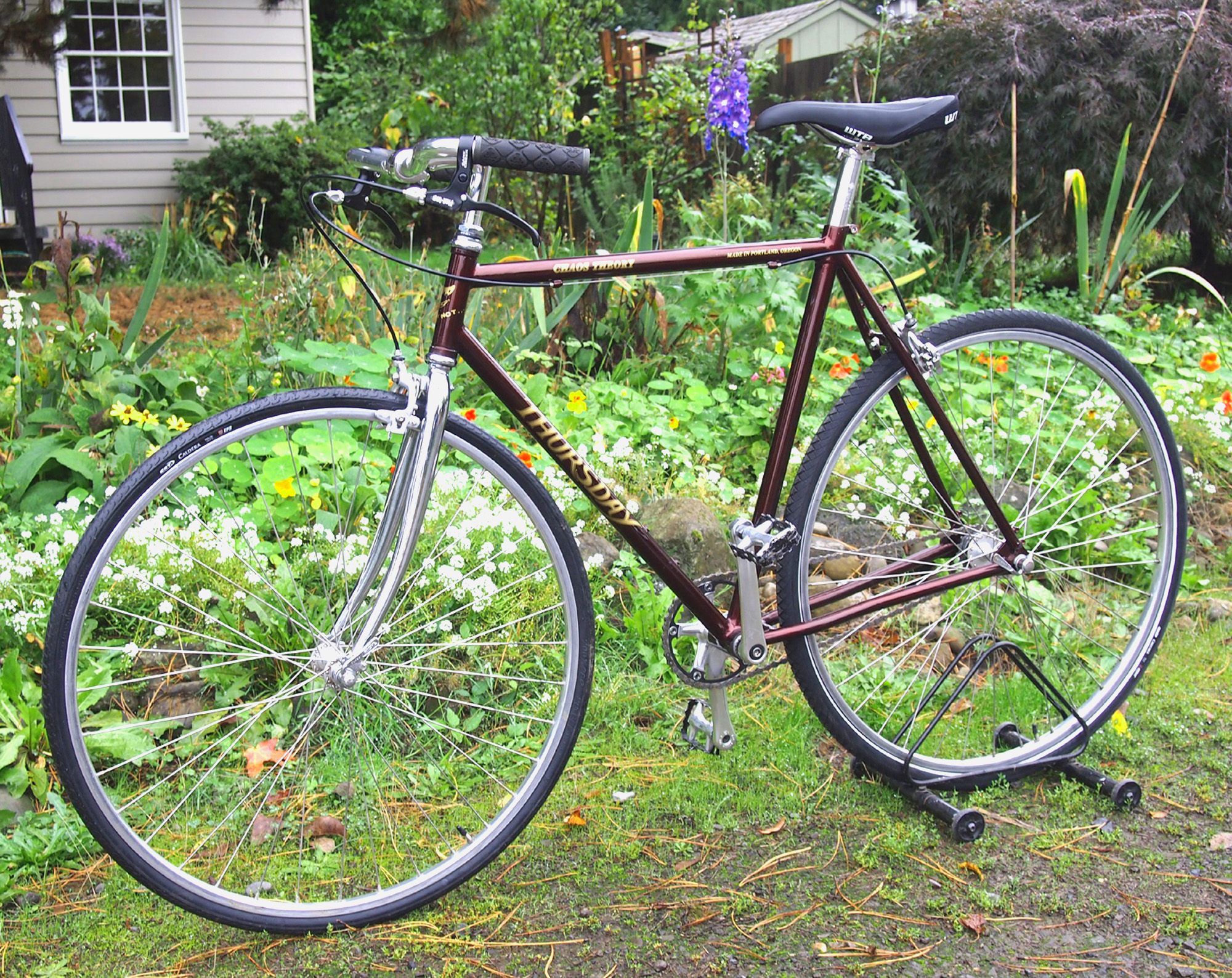 This page is for the new "Chaos Theory" street single speed. You can see it at the "VeloCult" bike and beer shop in the Hollywood District, Portland, OR. I told them it is OK to demo the bike.

What makes this bike better than all the Taiwan-made single speeds you can buy for peanuts? You may ask … One difference is the strong chainstays, made in-shop from aircraft-grade chrome moly tubing and stiffer than tailor-made stays. What I learned building BMX bikes is how to make a bike that won't turn to mush when you lay onto the pedals but still gives you a decent ride..

This particular bike is sized for an easy-riding woman, 5-4 to 5-6 or so. Say 54 cm with a top tube shorter than the seat tube and a 72 degree seat angle. I used a lighter tubeset than I would for a heavier rider. Frame weight was 3.5 pounds before painting. It is a welded frame ... I've been on a tear Oxy-acetylene welding chrome-moly lately. 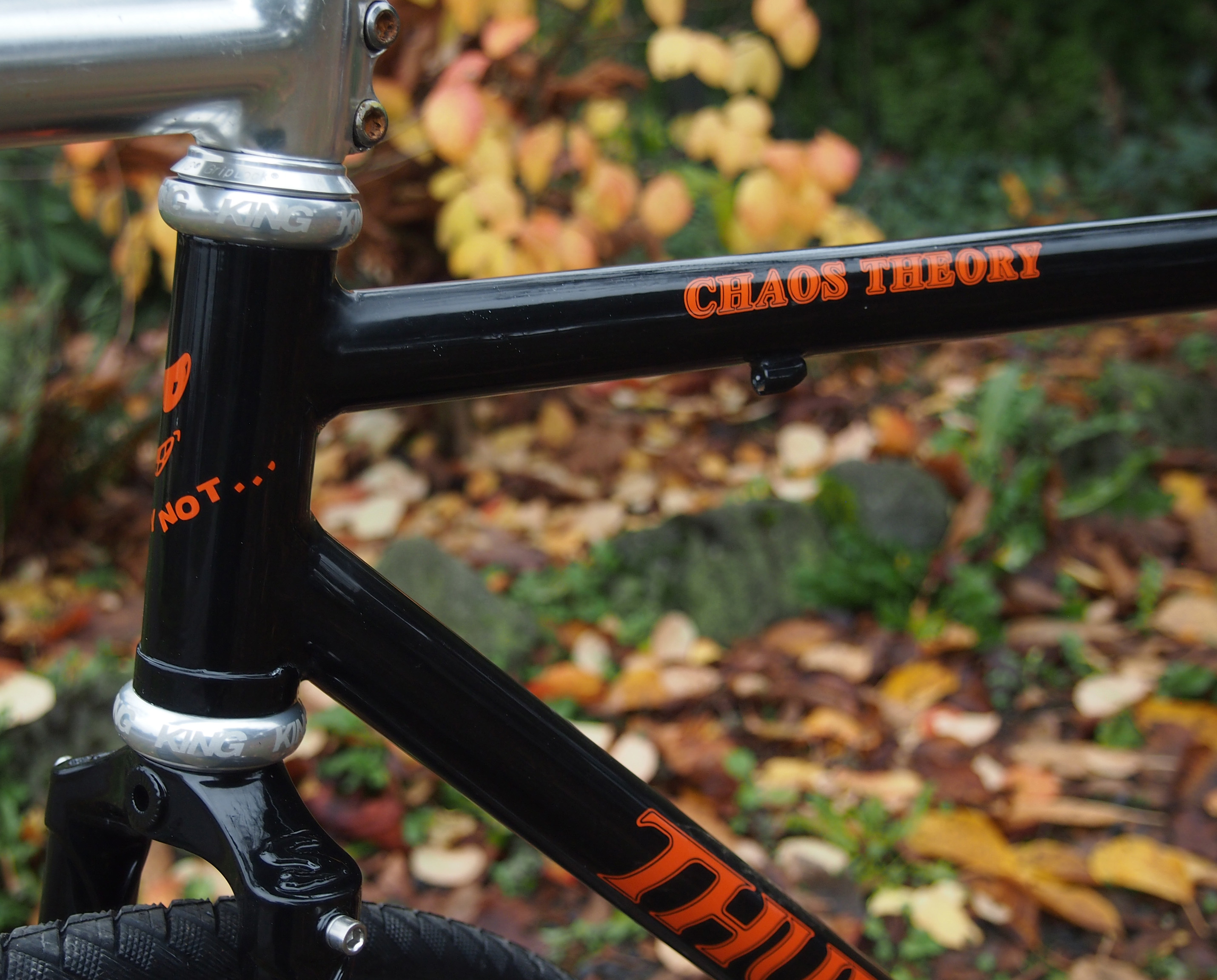 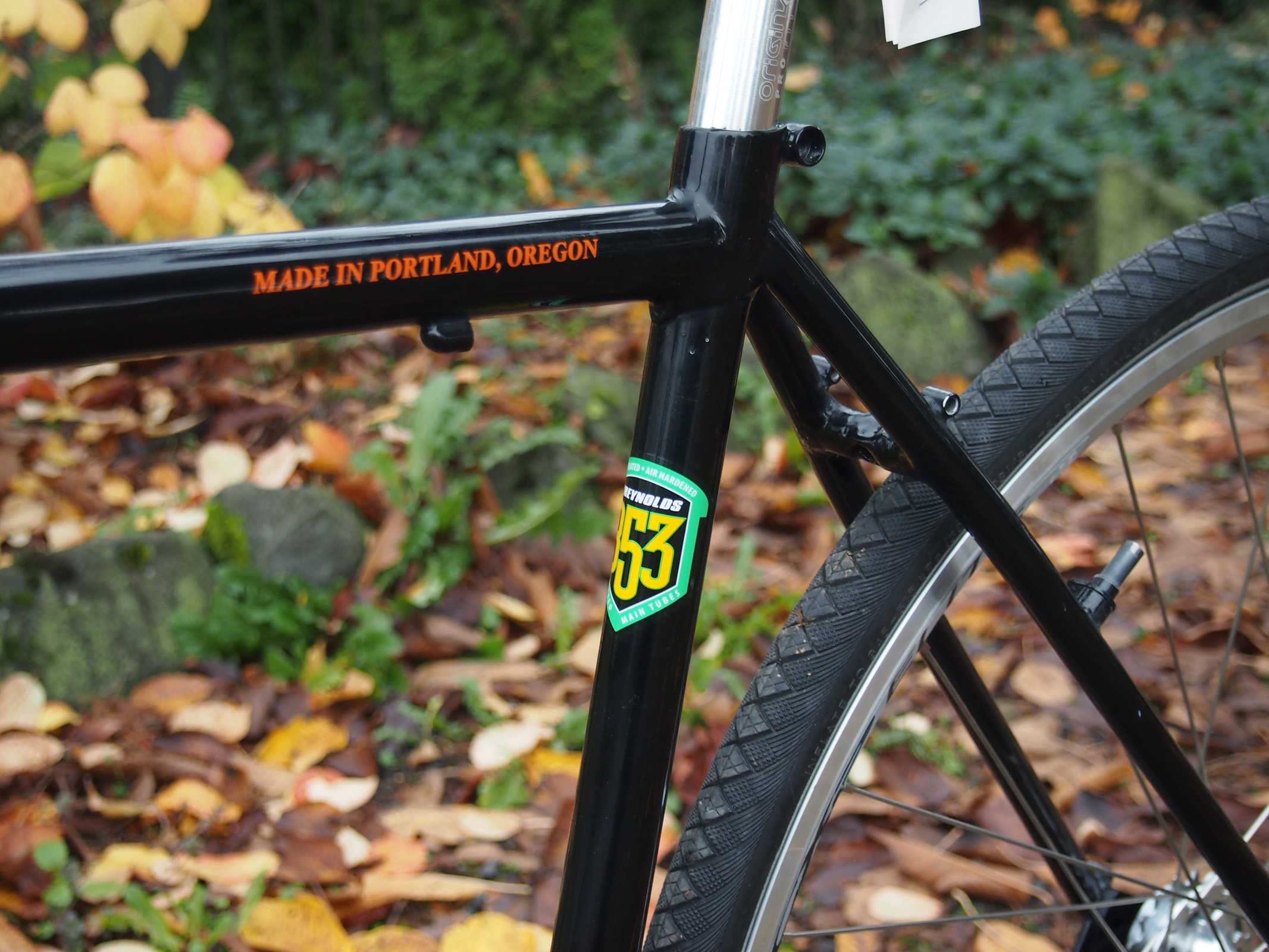 This frame was for a real animal. Four and a half pounds painted. the weight difference was from using .8-.5-.8 mm frame tubes and .035" tubing for the stays. Plus the larger headtube for the 1 1/8" steerer fork. This frame was fillet brazed 'cause 853 steel doesn't like being Oxy-acetylene welded, AT ALL!

Chaos Theory is basically a welded frame. That's to make the transition from Oxy-Acetylene welding to TIG welding later on. It can built as a fillet brazed frame or joined with silver- or bronze-brazed lugs (more money for the latter). The base frame uses lightweight, oversize heat-treated chrome-moly tubing, typically Columbus Zona or True Temper Verus HT.

This frame is built for ride quality first, but is quite light - the frame pictured at the top came in at 3.5 pounds before paint! - and easily builds up around 20 pounds, even using vintage equipment and street tires. Air hardening or ultralight tubing is available as well, at (of course) extra cost.

The bike is designed to be inexpensive and in keeping with that uses a mass-produced, chrome-moly "unicrown" fork. It looks pretty decent actually! Surprise!

If you want to run a fatter tire, a Tange fork could be used, or you could splurge on a custom fork.

Pricing: I am inclined to price the base frame with my BMX frames - under $800. That includes a welded or fillet brazed frame with rack and fender mounts, plus one set of water bottle braze-ons. The chromy fork adds about $50 and a better fork like the Tange or Soma will run in the $100-$150 range. Custom forks start at $325 and quickly get out of hand.