Once again, the story starts at the BMX track. I took the Acid Rain bike around for demo rides, loaned it out for months at a time to riders. They all loved it. They all asked me, "when you gonna build a street bike?"

It took a while, what with moving the shop and getting the new quarters into shape. I probably would have let it slide except Morgan, the thrash drummer across the street kept after me about it. Pocatello is like a back-east rust belt city, gritty, lots of concrete and steel. Morgan and his pals used to check in with the shop, mostly 'cause of the air compressor. They were riding street and it was amazing to see how much damage they did to their bikes.

They were riding heavy "street" bikes that looked like they were built for Iraq, let alone half-pipe work. They needed the weight, not because of the huge gaps they were jumping, but to stand up under the banging and grinding of street riding.

I kept watching, trying some of that stuff myself. The kids borrowed some of the Thursday demos and hucked around on them. Urban assault! They could do anything on a BMX-weight bike. But you could see that it was only a matter of time before concrete met steel, and you could be sure that concrete would win. One thing led to another, and to the big question - how can we lose some weight here and still have a bike that will stay together?

Maybe it was while I was putting on my pads.... THAT's what the bike needs! Shin guards!

Right where steel meets concrete! What if there was a bash guard to take the hits, then you could use the same tubeset as the Acid Rain bike. That took care of half of it.

The other half was geometry. Morgan and his pals

were riding these ramp bikes. They had the bars swung way back for control in that standing-tall-on-the-bike street riding position. I measured their bikes, then designed Black Rain so the bar position was just a little back from the headtube. Then to make some body room, I swung the seat back with a few more degrees. To keep things in balance I shortened the rear end. Once I got it welded up, the frame was right around five pounds. CRAZY!

I built the bike up and let the guys wring it out. They loved it, actually started fighting over it. I finally got it back from them so I could paint it. The bash guards worked perfect! The 3/16" drops were already starting to curl under - guess they gotta go to 1/4." The bike was a success - you do your part, the bike will make you look like a star. OH, Yeah

That's the story, this is the bike. 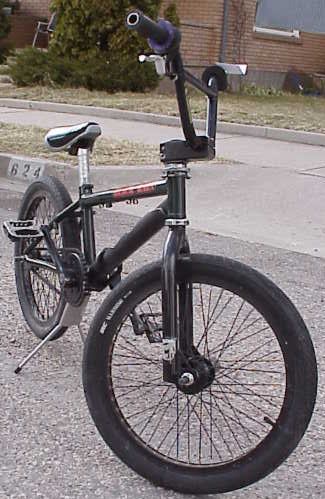 BLACK RAIN is the result. This is living proof that intelligent design and evolution are the same thing. Vida Loca to Acid Rain, now Black Rain! What next?

Like Acid Rain, this bike is a Taiwan candidate. Until then, Black Rain is gonna be a little pricey, but think how great you'll look on it. Think how much you'll make selling it on eBay in 10 years! Think about Elliot and E.T. and the gang riding their bikes across the night sky, leaving the cops staring at them, their mouths open and speechless.

Standard fork: Thursday has had pretty good luck with MacNeil and will hook you up. Buy the fork through Thursday and get it painted to match the frame!