This is a more-or-less up to date listing of what's available. Thursday builds mostly custom and special-order. However, he also puts together a standard model or two when things get slack. Some of the bikes listed are ex-works and prototypes. Some are private party sales by old clients, you got to contact them direct.

Christmas 2016! .. two kids bikes and a pro 20" atThe Goods BMX shop, at Northeast MLK and Stanton in Portland, OR. One bike and two frames are on consignment. Check them out!

This is a pro XL 20” BMX racing bike, sized for an adult rider 5’ 9” or so to around 6’ 2” (more or less). This is a bike you can win races on, one that will bring out the best in you. This frame is exceptionally stiff laterally, especially in the rear triangle. It hooks up NOW when you lay into the pedals. It is also a frame with good riding qualities, just enough give in the vertical direction so it won’t burn out your knees. You can ride this one all day.

This particular frame is set up with a mid bottom bracket and internal hose routing for a hydraulic disc brake. It has a 1 1/4” seat tube that takes a 29.8” seatpost. I like the Thomson and keep them in stock, otherwise it can be a tough size to find. This is a frameset and includes a painted-to-match SuperCross 20mm axle fork.

This frame has never been built up, but was shown at the last Oregon Handmade show, and was on display at HUB Brewing on Williams for a while.

This is race geometry, for riders who know what they are doing. The bottom bracket is high enough you won’t hook a pedal going low on a turn and the steering is fast enough the bike won’t try to run up the berm. It will go where you point it. This frame will give you an edge on the first straight, setting up for a jump, or coming out of a turn.

"Phantom of the Opera" junior. This bike was ridden 2 seasons by a strong, sponsored 12X rider, all the way to the Grands. The kid moved on and the frame came back. Never cased or crashed. This bike has had two minor dings filled and has been repainted in its original red. This frame was built to take an adult-sized fork - the rider actually used a full-size Answer carbon pro - and has tire clearance for 1.75" full-size tires. It is set up to run either 406mm standard or 451mm "mini" rims and tires; the old Shimano DX V-brake or Paul Moto brakes will reach both rim sizes. It has a euro BB shell, and is extremely strong. 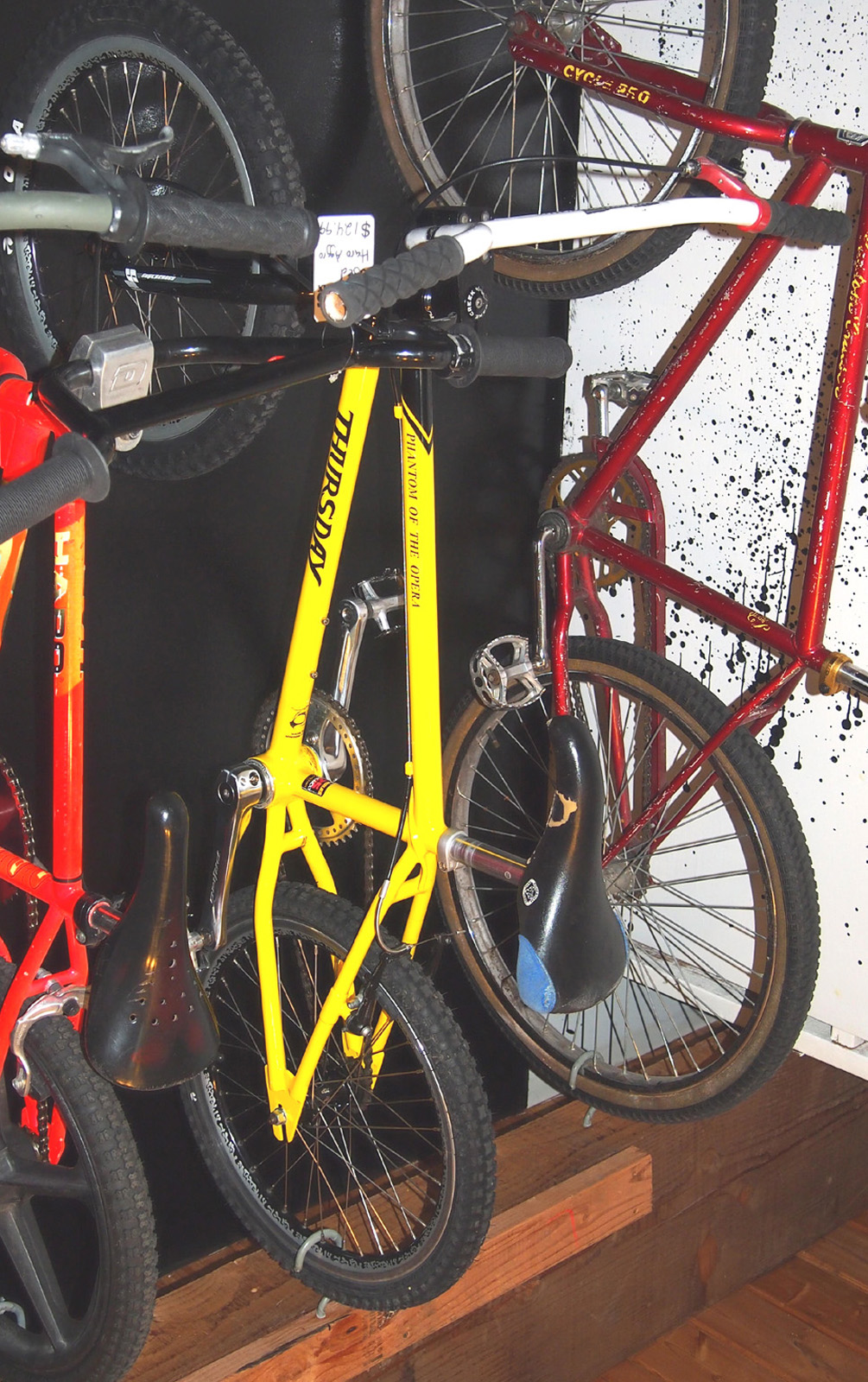 I built this for my son back in the day. He came up with the name "Phantom of the Opera" and he rode it everywhere. He also raced it at Duke City BMX in Albuquerque. It is an early effort and pretty much sticks to the standard pro geometry of the day. The frame has water bottle mounts because the kid was riding it everywhere and we were living in the high desert. Years later this frame was raced a season at Coeur d’Alene’s Cherry Hill BMX by a talented kid whose single mom couldn’t afford a bike just then.

This is a complete bike with top-of-the line, “old skool” equipment. The wheels were built by Primo with Odyssey T-1000 rims on DK sealed hubs; crank is a Primo Powerbite. Odyssey stem. Bars and fork are SuperCross, later addition (originally had SE bars and fork). A small adult rider might want to replace the fork with something like a SuperCross Pro Fork; the current setup is just fine for any rider under 110 pounds. 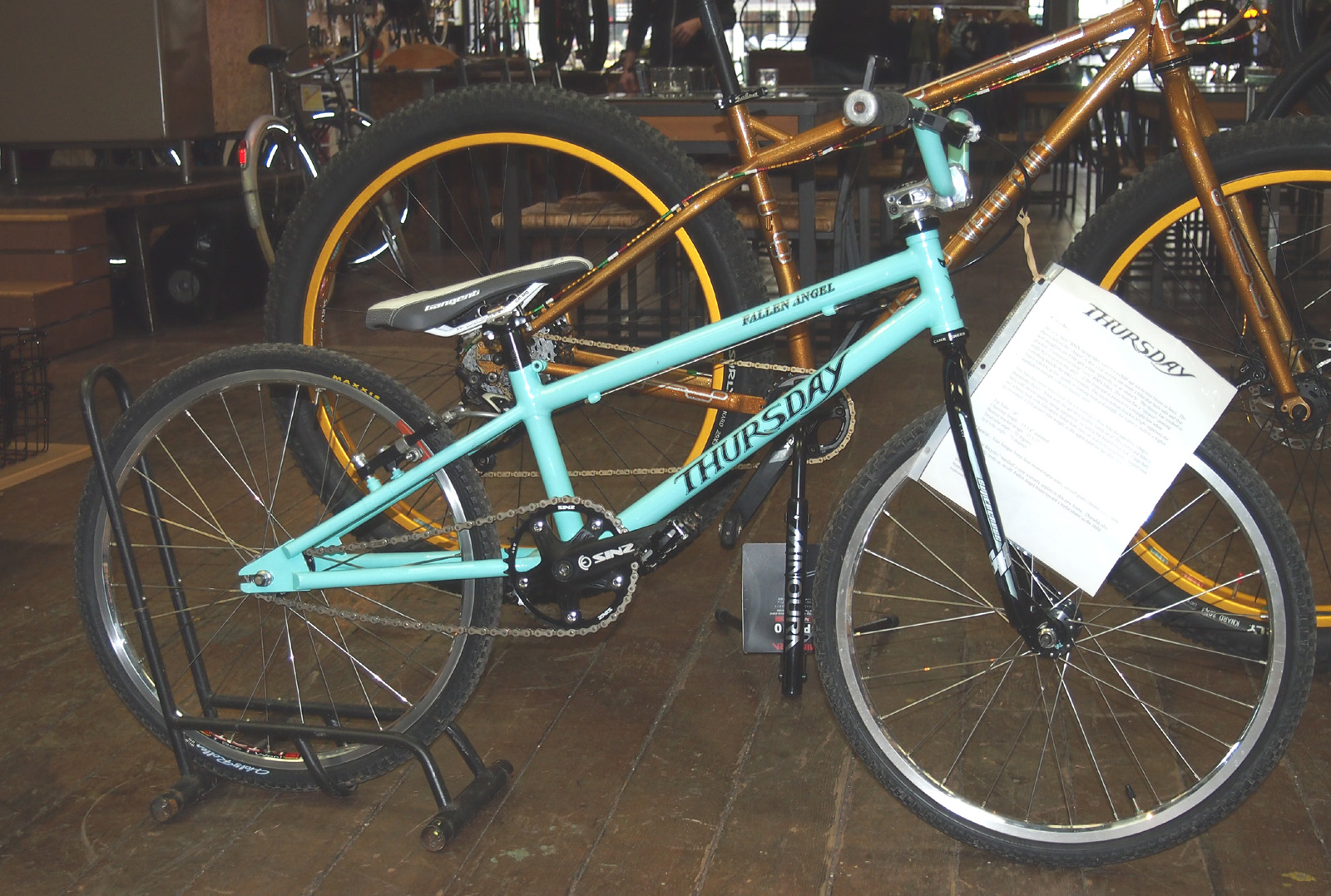 This complete bicycle is on consignment at VeloCult Bicycle shop/bistro in the Hollywood District of Portland, OR.

This is a copy of a bike I built for a young rider at Snake River BMX in Idaho. She went from a zero to a hero and took a couple state championships. The theory behind the “Angel” is that a kid starting out needs a bike that feels safe and that will straighten out if she gets a little squirrelly on an obstacle. The theory has worked in practice. Compared to most “mini” BMX bikes: The frame has a “slower” steering angle that improves the ability of the front end to recover to a straight line when something knocks the bike off-course; The lower bottom bracket height improves the bike’s stability at low speeds or starting from a standstill; the frame is built to a higher standard of strength with top-quality steel.

This bike has never been raced, but was used as a show bike the last three Oregon Handmade shows. Some kids did get their grubby hands on it! 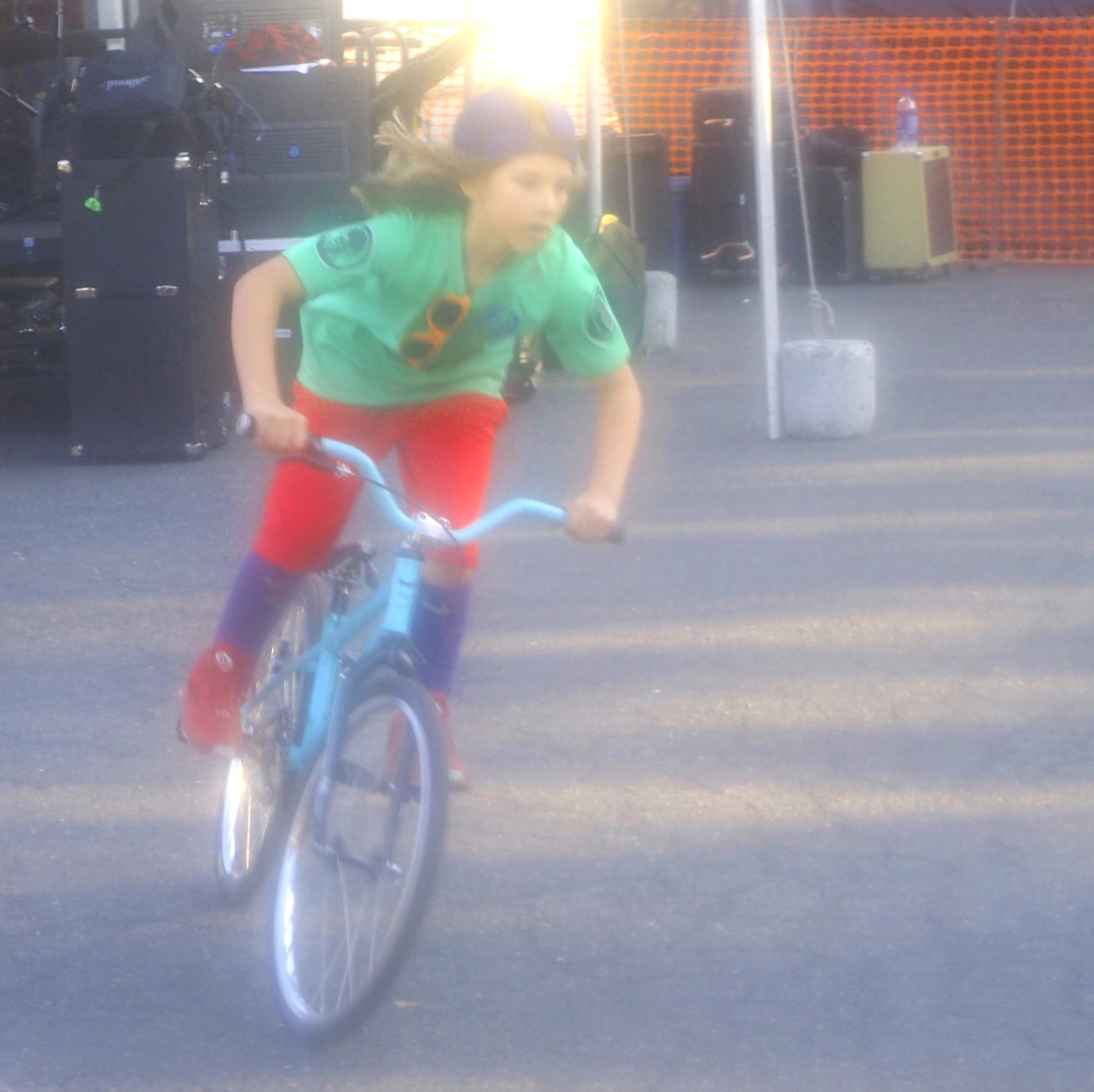 This particular bike is built with decent-quality racing equipment, including the SuperCross fork, Paul brakes and lever, Profile stem, Crupi bars, and wheels built with Alienation Ankle-biter rims on sealed-bearing hubs. SuperCross recommends a 110 pound rider weight as the upper limit for the Mini fork.

Thursday Bicycles’ standard 1-year warranty applies to this new frame. Thursday also offers a 50% credit on an old Fallen Angel frame toward a replacement as the child grows.

MUTTONMASTER! GONE to that gentleman from Portland Oregon. 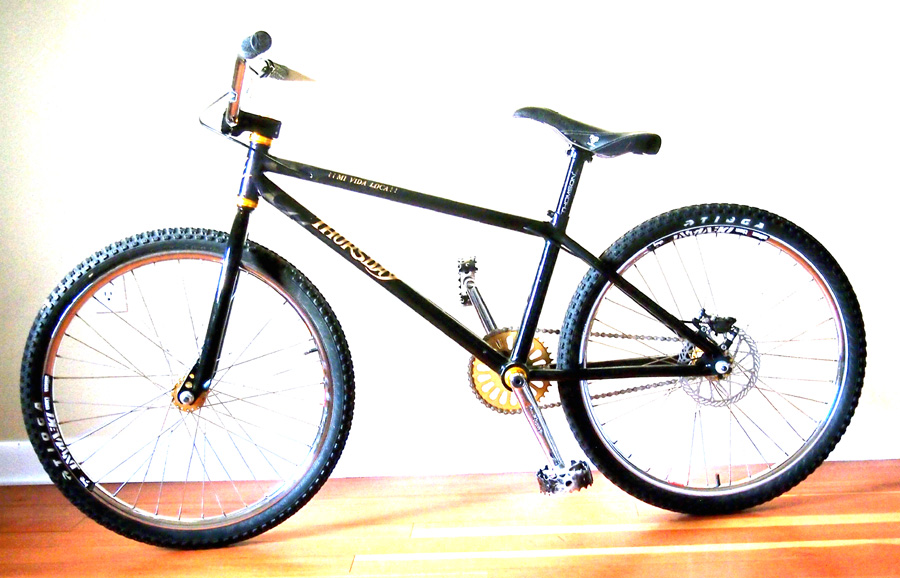 Prototype frame for the "New Model." This

is a fillet brazed frame built up from Columbus Zona. Showed at the 2007 Handbuilt Show, then test-ridden that summer. Jumped a lot but never crashed or abused. Kandy red fade to Aztec gold metallic with glitter, for that look of understated elegance. This frame has a fixed 16" chainstay length with Breezer dropouts. It handles fast. Comes with a nearly new Marzocchi Bomber fork, 5" travel and butter-smooth ride, but it weighs more than the frame! $700 plus shipping. $625 w/o fork.