It CAN be done! 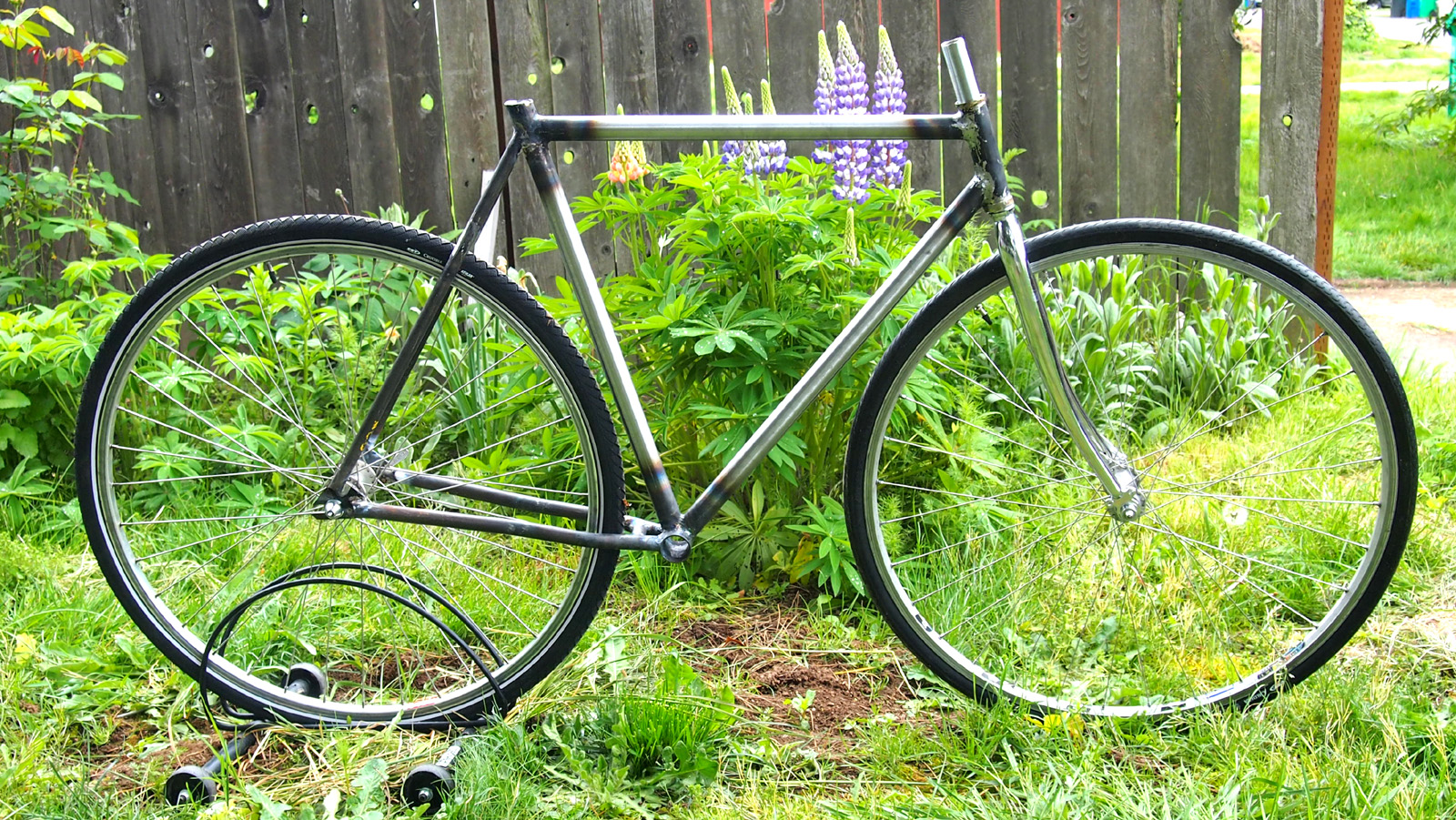 Chaos Theory is a welded frame. That's to make the transition from Oxy-Acetylene welding to TIG welding later on. The base frame uses lightweight, oversize heat-treated chrome-moly tubing, typically Columbus Zona or True Temper Verus. This frame is built for ride quality first, but is quite light and easily builds up under 20 pounds. The bike is designed to be inexpensive and in keeping with that uses a mass-produced, chrome-moly "unicrown" fork. It looks pretty decent actually! Surprise!

This is a story about a method of making bicycle frames. It is a technical subject, but there is a human dimension to it as well. Call it a passion if you will.

I make bicycles under a nom de guerre, Thursday, which is also the brand on my frames. In the spirit of the old French constructeurs, I make a lot of my own dropouts, stays and racks and frame fittings as needed. I have a small shop in an attached garage, with a frame jig, tube bender, a mill, torches, compressor and air tools and a beat-up workbench made out of an old solid-core door. I do my own paint. I'm an artiste!

With these tools and using a few simple gauges and carpenter's levels, I make frames that are straight and accurate. It took years to learn the craft and some of my older frames would probably not meet the standards I now set for myself. Oddly enough, the people that have those older frames love them.

There are two basic toolkits used for joining up steel frames: torch-and-tank sets where an intense flame does the work, or shielded arc welders such as TIG, where an inert gas “shields” the arc and prevents oxidation or burn-through of thin tubing material. Shielded arc welding is a fairly new method and the tools are expensive. It's fast. A good welder can TIG up 10 frames a day. It's even faster in a production setting. Oxy-acetylene involves a pair of gas tanks and a torch where pressurized oxygen and acetylene mix and burn with an intense, beautiful blue jet flame at the torch's tip. A good torch set, with tanks, caosts hundred dollars, whereas a decent TIG-welding setup will cost a few thousand.

Most framebuilders use Oxy-Acetylene torches, and mostly they braze frames together with bronze or silver filler, either with lugs or by fillet brazing. That was what I did too, starting out. It was natural, it was how bikes were all made, right? I was making mountain and dirt racing bike frames, fillet brazing them because no one made lugs with the angles I needed.

I was in Albuquerque, had picked up a frame from the sandblasters and then gone to see Bedeaux l'arquebusier (gunsmith) about my hunting rifle. Jim Bedeaux had been a French-speaking marine in World War II, thrown in with a unit made up of Louisiana Cajuns. After the war, he worked in aircraft plants on the coast before moving home to Albuquerque and settling in as a gunsmith. He was a good one, too. That particular day I showed him a fillet brazed mountain bike frame. He asked me why I wasn't welding my frames. “I didn't know you could weld this stuff with a torch,” I replied. He said that was all BS and all you need is a steady hand and a neutral flame. I thought about it, about those 300,000 airplanes the US made during World War II, most of them with tubular chrome-moly subassemblys. All welded with torches, mostly by women. Take that, Mr. Hitler!

Next time I saw Mr. Bedeaux I had a few sample joints. They looked like shit but you couldn't break them. The old man gave me that look. I went back to Window Rock and welded up some more practice joints. It was kind of fun. I had started using aircraft-grade tubing, so the next order I included some special welding rod, Oxweld 32CMS.

The process is like fillet brazing, but at a much higher temperature. You wear darker glasses. What you see is a puddle of what looks like molten lava at the joint, formed from welding rod. You heat the puddle and let it eat into the tubing. As in fillet brazing, you have to add filler from the rod. Unlike brazing, the molten steel is viscous, it moves slowly and has a natural tendency to form a perfect fillet. It won't run or droop the way bronze will. This is a slow, kind of meditative process. There is no buzzing arc, just the torch in one hand, the rod in the other hand, and two pieces of metal becoming one. If you turn up the fuel just a hair over a neutral flame, the puddle loses its crusty look and becomes glassy-smooth. This is perfection. But if you overdo it on the fuel, then the molten steel loads up with carbon, enough to make it hard and brittle.

It took a while before I was ready to actually weld up a frame. I started welding my BMX frames, because the riders preferred a welded frame to one that was brazed. And I welded racks, then whole utility bikes. Once I got the hang of it, it seemed I could do no wrong. I took my files and tried knocking down the welds a little. The files bit deep into the welded areas taking them down quickly without loading the file. The result was a beautiful fillet of steel at each joint.

I started working with thinner tubing. Tubing with .9 mm walls welded up easily; at .7 mm I started burning through the tubes and having to quickly patch the holes before they cooled. Later I got better at welding thin tubes, using a tiny, 00-size tip on my Victor torch.

Below is a typical welded headtube joint. The first picture shows it as-welded; the second after a light grind-and file; and the third shows the same frame joint after sandblasting, ready for paint. The gusset has to be brazed on, at least until I can get a TIG welder. OA welding is just too hot to join thin or tiny pieces to thick or heavy ones. The internal hose guide is mild steel, brazed in place. 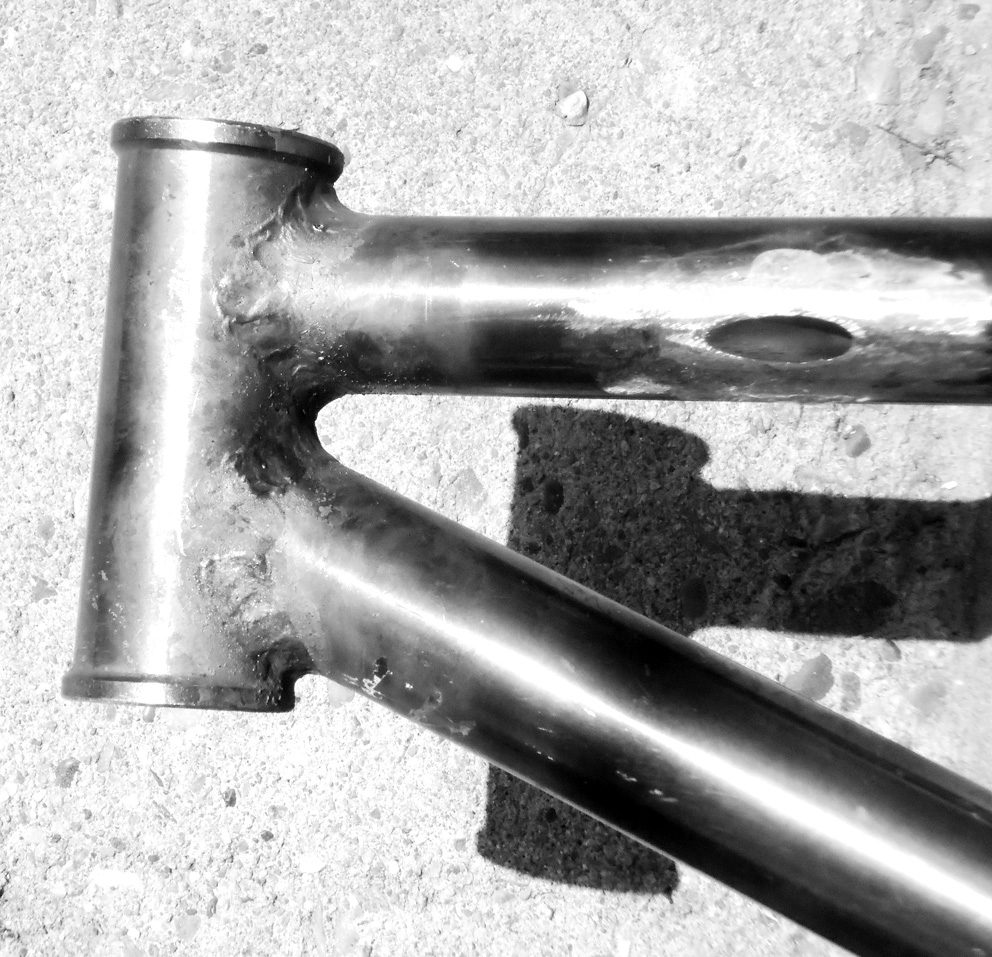 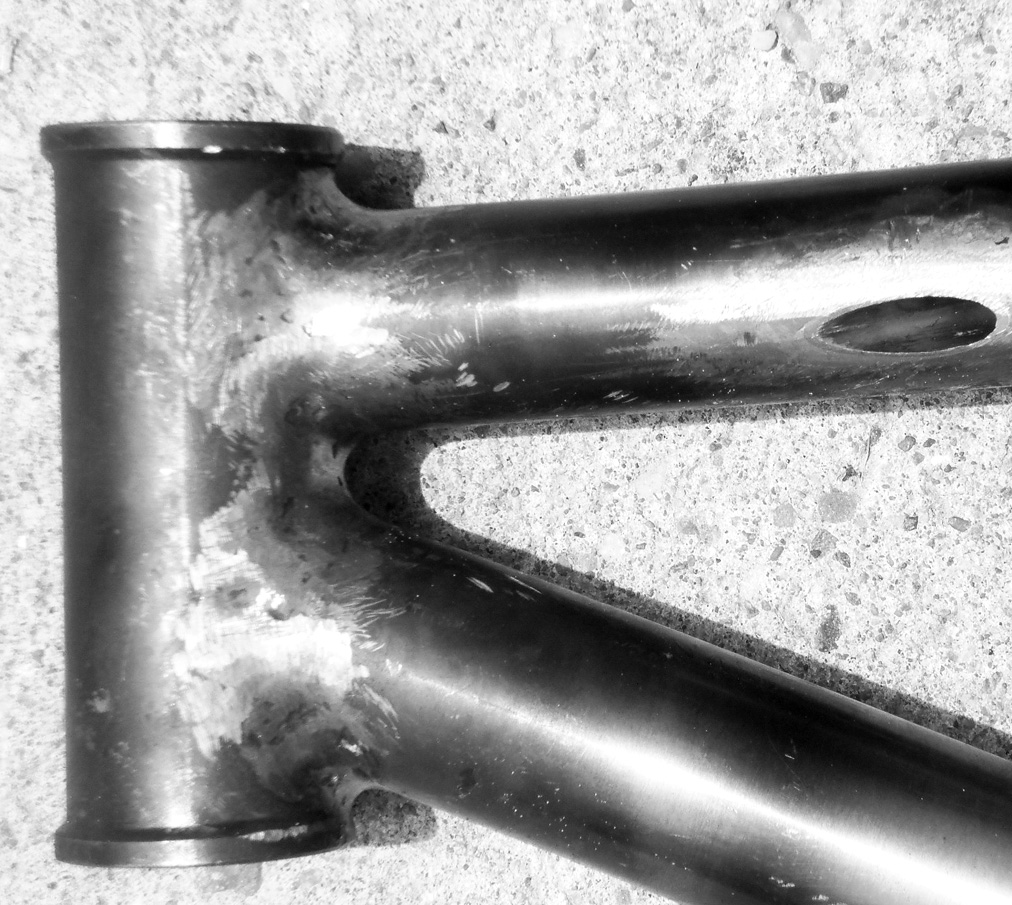 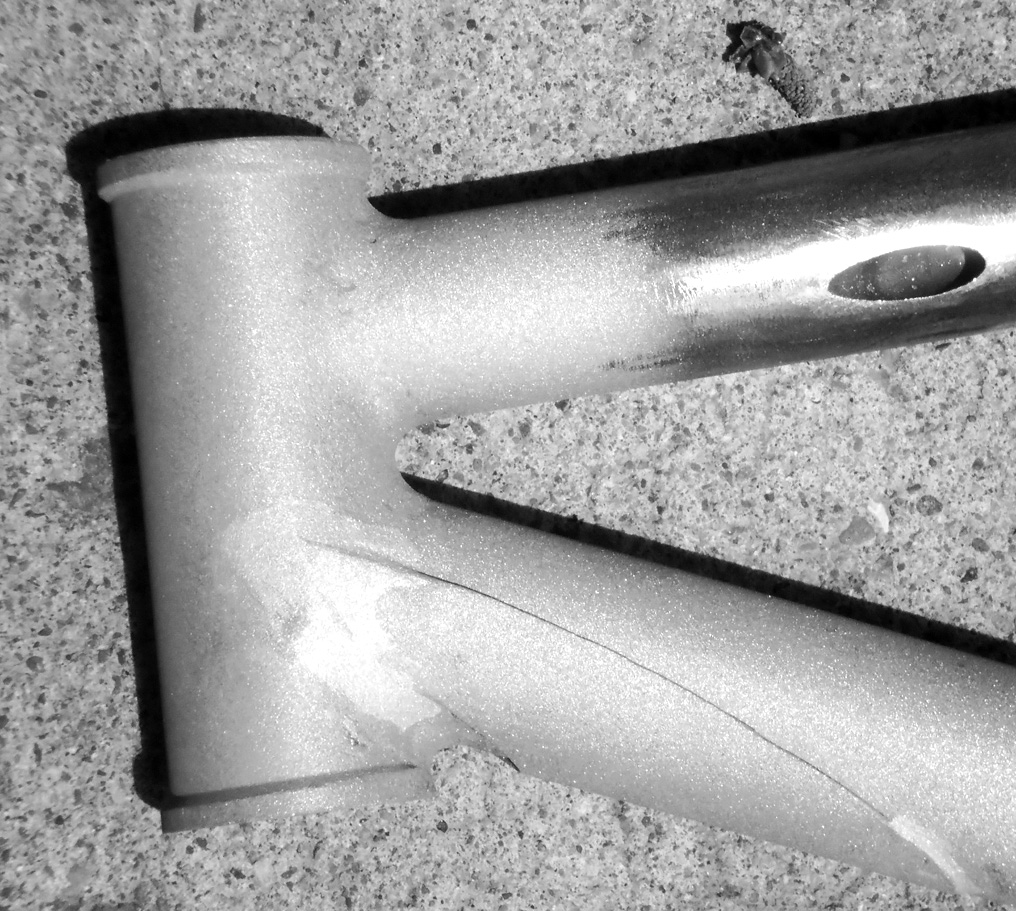 Bicycle Quarterly had an article a few years ago about Andre Reiss, a French constructeur of the 1930s who welded his Reyhand frames from .03 and .04 mm tubing. The article notes “today many consider it unwise to gas-weld thinwall steel tubes. But there are no known failures with Reiss' machines, nor do his frames show signs of heat distortion.” My own thought is those numbers represent the thin center of the frame tubes, which would have been thicker at their butts. If the tubes were .7 mm at the butt, welding them would have been challenging, but not impossible. On the other hand perhaps Reiss sold his soul to the devil in trade for unearthly skill with a torch.

What are the advantages of welding chrome-moly tubing? First and foremost is a welded frame can be modified or repaired by welding at any time. You can cut out a piece and weld in a new one. It can be heat treated post-weld, and the Oxweld rod is heat-treatable as well. You can braze a welded frame if you need to, but you can not weld a piece of steel if there is bronze in the weld area.

What about heat? The weld is definitely hot, much hotter than a brazed joint. The puddle of molten steel completely wipes out the miter joint, replacing it with a monolithic fillet of steel. The frame tubes are discolored for several inches around the joint, and the weld itself may be covered by a dull scale. Unlike a nicely TIGed frame, the welded frame looks like a survivor of the blitz. The weld joint is not a rippling series of little discs; in order to run a decent weld bead, you would have to start at one point and weld right around the joint. If you do this, the joint will distort when it cools. The alternative, if you want a good-looking joint, is to put lots of heat into the the weld bead, moving just fast enough that it collapses into a fillet, slow enough so that it penetrates the metal being joined and becomes one with it.