If you ride BMX, you are a prime candidate for dual slalom or four-cross. The bike-handling skills are similar, just the venue is different. Slalom is prety much gone but it's been replaced by a bigger, badder and more BMX-like event, Four-Cross. So what is Thursday gonna do about it?

Build a bike and look for an event to enter it in, that's what. 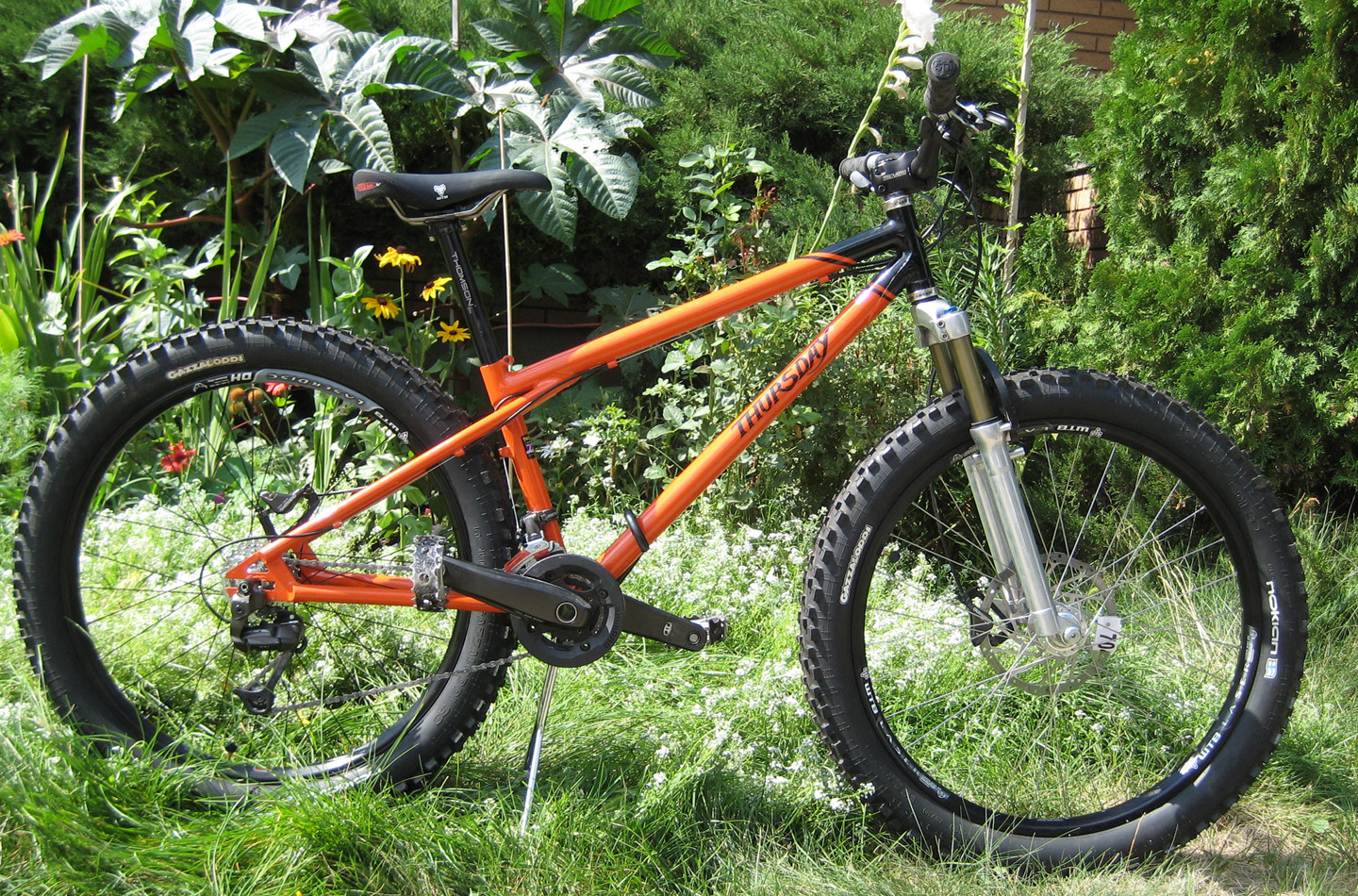 Four Cross can be a little more extreme than your typical ABA track, plus the rules indicate a geared bike. A lot of 4-Cross riders are using full-suspension bikes - and a lot of them are not! In the absence of a full-on CNC machine shop, Thursday went the hardtail route. So the idea is to take advantage of the situation and build the best hardtail out there. This is a bike that will make the transition from BMX to 4-X a little easier, perhaps. As it turns out, a lot of the European 4-cross races are being won on hardtails, and the Euros seem to be homing on on the same geometry Thursday is using. Stay tuned for reports from the front.

The overall dimensions of the Four-Cross bike are similar to the ones that worked so well with the 'bee . It puts the seat way back and out of your way with a 68-degree seat tube angle and compensates with a longer top tube. The head tube angle is 70 degrees and there is 12 inches clearance under the bottom bracket shell (13" to BB center) with the relatively short Marzocchi World Cup 4-Cross Fork. Using a longer fork will slow things down - each added inch of fork length, axle to crown race, subtracts about 1 degree from the steering angle and adds about 1/2 inch of ground clearance. Using a shorter fork, of course, speeds things up.

This bike was first shown at the 2006 North American Handmade Bicycle Show in San Jose. There were some glitches getting the Shimano Saint group working, but it is all there now. The frame is around seven pounds and total bike weight is in the mid-30 pound range. Even with heavy downhill tires, it will still come in under 40 pounds.

The Four Cross is still in a state of flux. The bike you see here is a prototype. Based on my BMX experience I wanted a bike that could be set up with wicked fast handling or could be trimmed down to something a little more sedate. It has to be able to take some pretty severe use. I set it up so it could also be used for dirt jumping, "northshore" rides, and even a little light downhill. The frame will actually take a 3" Gazzalodi tire, although you wouldn't want something that aggro on a hard-packed trail or track. The bike right now has WTB 2.55" WeirWolf race tires. They are pretty good on packed dirt and a set of them weighs less than one Gazzalodi. The bike handles as sharp as the New Model but feels a lot more secure due to its stiffness.

As of 2020 the bike is still kicking around, with "plus-size," 3" Surly Knard tires and a Marzocchio Shiver single crown fork.

A closeup of the rear wheel..

For the heck of it, I set the bike up with 3-inch Gazzalodis ..

.. the fork is an old Marzocchi Bomber QR20 with a Black Spire brake arch. Another fork that will take the Gazzi is the Marzocchi Shiver single crown. The World Cup 4X fork will not take a 3 inch tire.

allow trimming the chainstay lenghth from 16" to about 17.5"

Some features of the bike include the ISO chain guard mounts, and an internal routing for the hydraulic brake lines. Hydro is the way to go for disk brakes, but the usually-exposed rear brake hose looks kinda vulnerable, don't you think? The Shimano Saint group allows for a truly solid mounting of the derailleur on a bike with horizontal dropouts. So long, sliding derailleur hanger!! The derailleur stays where it should be relative to the cassette gears, no matter where the rear wheel is bolted up in the horizontal drops. The 203 mm brakes stop like nothing else and there is no need to relocate the caliper when you slide the rear wheel back or forward in the horizontal drops.

I have been riding the bike since then, mostly on trails and jumps. The Saint group is really a step up for hard-core riding. Shifting is easy and solid no matter what is going on, plus you can dump or upshift 3 gears at a time with the rear thumb shifter. I found on fast, technical dirt the bike stays together on jumps, is solid-feeling and has neutral handling characteristics with the rear end set at 16.5 inches. The handling inspires enough confidence that I wouldn't hesitate riding it clipped in. I will probably save the 16" rear end setting for street riding. The bike is no feather, but can be pedalled uphill to trailheads.

I will try to post a little more info here as things roll along. I'm thinking that this frame could be TIG-ed together with light oversize tubing, weigh in the low 5-pound range and ride great while maintaining plenty of reserve strength.

Standard fork: This frame is designed around a 120mm travel fork like the Marzocchi World Cup 4-Cross, or the White Brothers Fluid 120